The Rise of the Vizsla ‘Velcro Dogs’ in the Southeast 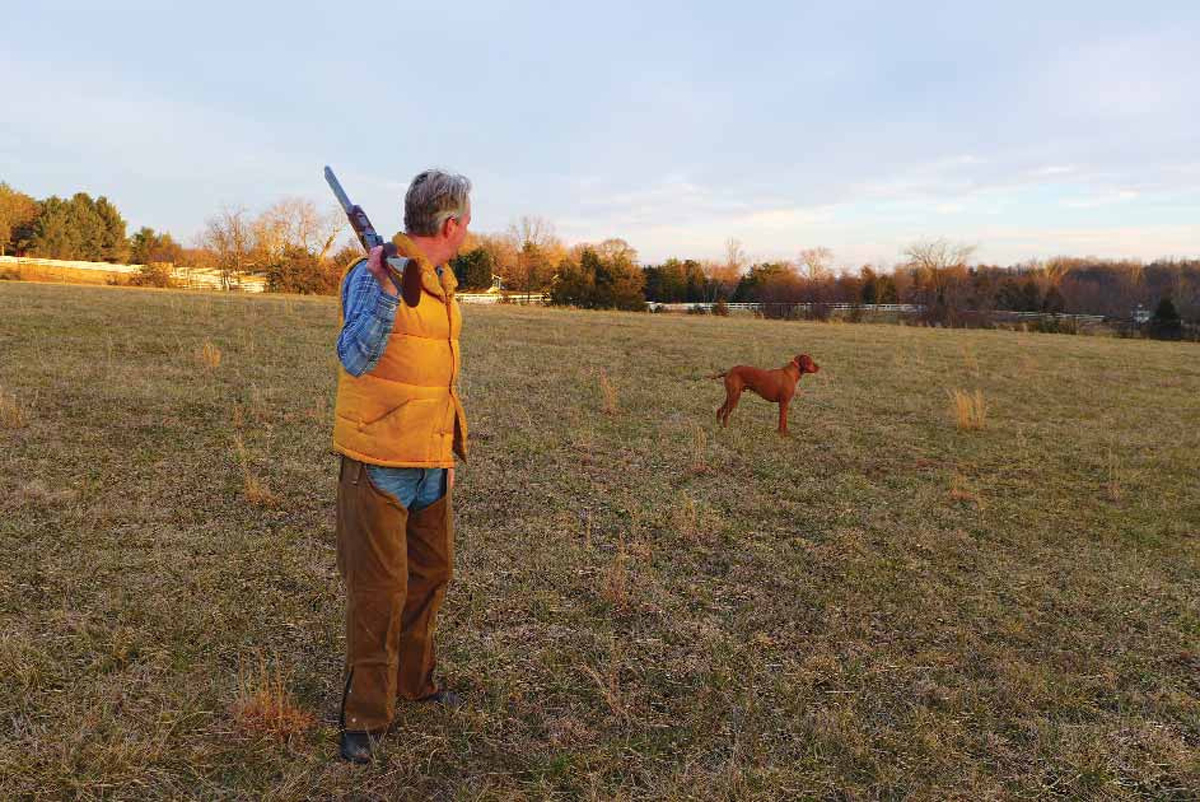 I have owned several dogs: a Dalmatian that bit friends, a Great Dane that ate a couch and a Shih Tzu that barked at the sky. Today I own a fat Dachshund that is not house broken and an English  Springer  spaniel  with a misspelled name. (Called “Gauge” to reflect his gun-dog heritage, the name morphed to “Gage” after a nurse’s  spelling  error  on paperwork  at the animal hospital. Yes, he frequents the animal hospital.) The  error carried over to Christmas cards and the dog collar.

I cannot look at Gage or say his name without noting the misspelling. The other flaw I have trouble living with is his passion for running away.

Gage requires daily exercise; we run several 5Ks each week . Sometimes we run with my friend Howard “H.K.” Kelly and his Vizsla, Crusoe. Both upland bird dogs were born to hunt and require outdoor activity. Upland terrain is dry and elevated, like the land in central Virginia.

Upland dogs specialize in flushing pheasants, quail, grouse , snipe, pigeons and doves from grasses and brush in fields and meadows .

Unlike Gage the Spaniel, Crusoe the Vizsla never strays far from his master. In the field or at cocktail parties, the animal shadows H.K., living up to the nickname bestowed  upon  the breed: “Velcro dogs.” Crusoe may stick to my friend like Velcro, but he is a wonder when it comes to tracking, pointing and retrieving with the “soft mouth” attributed to his ancestors. And

H.K. only occasionally hunts with Crusoe.

“The dog is a natural,” says H.K., a  North  Carolinian who now lives in Keswick, Virginia, near Charlottesville. “I didn’t get Crusoe because I wanted a hunting dog. I got him because Viszlas are beautiful, athletic and loyal. They’re great companions. But it’s fascinating to see the genetics take over in the field .”

H.K. gave me a copy of Gun Dog after meeting Gage. Author Robert A. Wolters was best known for applying the discoveries of animal scientists to hunting-dog training. H.K. was trying to tell me something with the gift. Its not the car. Its the driver.

I read only the dust jacket but pay Wolters the biggest compliment: You lived an interesting life. From the  back  cover: “His sporting interests included hunting, angling, bobsledding, ballooning, and soaring in sailplanes , in which he held the highest rating.”

Aside from being a sportsman and a writer, Mr. Wolters was a chemical engineer and taught art history  and  photography. He was a picture editor at Sports  Illustrated.  I am  surprised  he was never president of the United States. I wish  he were  running for office today, butWolters suffered a fatal heart attack  in 1993 after piloting a glider near his farm in Hanover, Virginia. He was 73.

I need to read his book.

Recently I saw Crusoe in action; I joined man and beast to hunt on a farm in Keswick. I left my dog at home.

“You’re thinking of spandex,” I reply. Crusoe, nose to

the ground, does what he was genetically engineered to do. I explain a DuPont scientist in Waynesboro invented spandex in 1959.

“It should be worn sparingly,” I say, as Crusoe alerts to something in the heather.

“Spandex serves a purpose, but it needs to be worn beneath other clothing … on some people.”

“Velcro is a better invention.”

We walk with guns up and I disclose what I know about Velcro; a Swiss engineer invented it in the 1940s. The idea of the hook-and-loop fastener came from doing what we were doing: walking in a field with a dog. The inventor noticed cockleburs stuck to his pants and to his dog’s coat. The rest is history.

I notice cockleburs on my military fatigues; Velcro straps enclose the sleeve system of my Gore-Tex jacket. To pay homage, I pull a strap and produce that ripping sound only Velcro can make.

According to H.K ., Yizslas have been more popular in the West but are increasingly bred along the Eastern Seaboard. He should know: six years ago, he had to travel to Erie, Pennsylvania, to get Crusoe. “Crusoe’s parents were sire, Chance’s Duce Down, and dam [bitch], La Bella Bina’s Kia Maria,” H.K. says. “The dam came from Behi Red Chief, the line of Cliff Boggs, who wrote The Vizsla. Behi Red Chief was an AKC [American Kennel Club] Dual Champion. My breeder, Tim Rohrbach, said the dam ‘s line also interested him because it recently came over to the United States from Hungary.”

Jay Youmans, who began breeding Vizslas seven years ago, attests to the rise of the Vizsla in the South. The Georgia­ based breeder places Vizslas with young urban professionals, families, and increasingly, plantations . “More highly athletic types want these red dogs,” says Youmans, whose Vizslas have four to eight litters each year. “The Vizsla has become a ‘designer’ breed, heavily sought after by joggers, bikers, walkers and hun ters.”

People travel from major cities, including Atlanta, Jacksonville , Miami, Orlando , and Tampa, to Youmans’ operation in central Georgia for a prized Vizsla.  These  dog­ lovers have one thing in common: they are physically active and covet dogs that require the lifestyle. “I’ve placed Vizslas with people who mountain bike or walk for miles on beaches,” adds Youmans. “Vizslas are not aggressive and are great in public places. They are terrific  with children  too.  But man, can  they hun t.”

Youmans claims a growing number of dove and quail plantation owners choose Vizslas over  traditional  spaniels  and poi nters. He attributes this  preference  to a changing  of  the guard in plantation ownership. “Some plantations have  been around since the Civil War,” he explains. “The younger owners who inherit these outfits want these dogs. Perhaps younger folks have traveled west where Vizslas first gained prominence in this country.”

Darin Strickland had been training, hunting and guiding with Vizslas for 10 years when he first profiled the breed and its history in the October/November 2008 issue of this publication. “The Vizsla has a long history going back 1,500 years,” says Strickland. ” The dog originated with the Magyars, nomadic people who slept with Vizslas in tents. Their descendants, the land barons of Hungary, were more gregarious than their counterparts in Western Europe and the dogs reflect that.  This is very different from the proper kennels that characterize English stock.”

Strickland sees things similarly to Youmans here in Virginia. For instance, out-of-state college students often recognized the breed when locals did not. Longtime, well­ traveled quail hunters were skeptical when the red dogs came out of the kennels to hunt Blandfield Plantation, near Tappahannock , where Strickland guided for eight years.

He also recalls when head guide and training mentor Dave Pomfret, who has titled numerous Vizslas, won a field  trial in Georgia’s Quail Belt with the only Vizsla in  the early  2000s. “I’ll just say those boys weren’t too pleased when the Vizsla took the stake. Field trials and plantation hunts are wrapped in tradition.”

Strickland believes Vizslas initially gained acceptance in western states because the land there is similar to Hungarian terrain.  The performance ofVizslas in field trials, hunt tests,  and show rings has led to their growing admiration in the South. “The Vizsla is striking, which has made it a bit of a designer dog,” says Strickland. “It’s highly versatile, and it is a good choice for the modern active urbanite and suburbanite . I’m a hunter, my wife is a jogger and the dog sleeps in my daughter’s bed. But if an owner doesn’t exercise the dog regularly and give it the attention it needs , it’s not going to be a good fit.”

If our lives depended on a kill we would have starved. At one point, Crusoe flushed a pheasant; my friend fired into the setting sun. We walked back to his Range Rover parked on top of a ridge. The only shots I fired came from my Leica.

One image stands out in my mind . I took the shot during quitting time, before we reached the vehi cle. In the picture, H.K., over/under shotgun folded over shoulder, watches Crusoe point at something in the thicket. I put the camera down  as  the  hunter followed his gun dog. I remain uncertain as to which creature more closely resembles Velcro.

Joe Shields has led integrated digital marketing and public relations programs for consumer, biopharmaceutical and government organizations. He lives with his family near Charlottesville, Virginia. 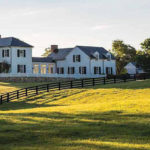 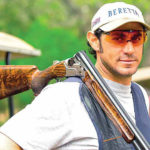