An inside look at the dynamics of a multiday sailing adventure that starts in the Chesapeake Bay and finishes in Key West.

“Hi there, old friends,” I whispered into the pin-pricked black night as if it made a difference that I said it out loud rather than just thought it — absurd, of course, as they were light years away. “It has been a while since I have seen you.”

They feel comfortable to me—familiar, predictable. Aries, Perseus, Andromeda, Cygnus, Sculptor and Tucana hadn’t moved in all this time as if waiting for my return and I realized it was my fault. On the sea, at night, alone, on watch, finding and steering by a distant star, covering the too-harsh light of the binnacle to reveal the brilliance above. Sky travelers, my friends and I, coming from a place unknown to an end unfathomable.

I love being on deck alone at night. The crew sleeps below. All that is left is the boat, the sea, the night sky and me. The big sailboat, Ragnar, finds its own rhythm. The steady wind from the west, interrupted by the 75-foot mast, main and genoa, sliding through the slot and driving us along at about 7.5 knots, the tell-tales attesting to the perfect set. The light sea giving us a bit of a hobby-horse motion, the boat rising up every several waves on a roller a bit above the others producing a rushing, gurgling sound as it slides along the boat, and then that shhhhhhhhhh whisper as it settles back down into the black. The little curls of turbulence on the surface aft the stern as the sea gathers back together from the cutting of the bow and keel, soon resuming its way, undisturbed, toward the coast, to slide up on some sandy beach pushing little grains of time ahead of it.

It doesn’t care. Perhaps it is in that predictable uncaring I find solace. No demands, no seemingly illogical changes, no hate or love … just being. To stay alive on the surface of this moving energy, I have to be alert. It doesn’t care whether I exist. In the cosmic order, I am inconsequential. I am the center of my universe but not the center of the universe.

November is the best time to ferry boats south from the north to their winter quarters. It is still cold and rainy many days in Virginia and Maryland but in south Florida the hot tropical sun warms the air into the high 80s. The bodies are tan, the sand is hot and the westerly breezes fill the sails with warm and steady winds.

The 50-foot Ragnar, owned by Scott George of McLean, Va., is a masterpiece of modern technology. Designed by Philippe Brand for Jeanneau, it has a 75-foot mast, a six-foot keel, 60.9-square-meter main, a 52.7-square-meter genoa, a beam of 15.6 feet and a diesel engine with a 62-gallon fuel tank. It takes heavy seas well, sails along sprightly and, when trimmed correctly, lays down a beautiful track. It is wonderfully appointed down below with every creature comfort imaginable. Different from the old days, but I must admit … it’s better.

The captain’s license, earned so many years ago, gives me a ticket that has brought me many places. Just appearing to know what you are doing is enough in a world that lacks so much practical knowledge.

I remember the racing days when I stared at the little telltales on the jib and main for hours on end, trying to coax another tenth of a knot out of my charge, my neck cricked so long that it was hard to turn my head. Spinnakers billowing out ahead, painting the sky with color, rocking on a following breeze, gossamer sheets clipped to the clews of a delicate, Doug Shore-built wonder.

Italian counts with their little white racing gloves and their warm ladies not having a clue what the crew was doing but enjoying it all the same. Myers Rum tents on green Bermuda lawns, dusty silver trophies so hard fought for now just taking up space, and the racing machine I spent so many hours guiding a scrap heap somewhere on the shore of one of the Great Lakes.

Now we just set the sails, engage the autopilot, relax, and tend the electronics. Want to come up a few degrees? Push the little black button. Have to bring in the jib a bit? Wind the sheet on the electric winch and hit the slow-turn side of the panel.

Through the night the big boat slid on down the Chesapeake Bay with the weather slowly deteriorating. Tony, Doug, Sean and I were all seasoned veterans and were ready to handle heavy weather, but the computer was giving up information that made it look like we were in for a long and heavy blow.

“The big high in the Midwest is sinking further south than expected and the low coming in from the southeast is jamming in closer to shore than we thought,” observed Tony. “The collision of the two fronts is going to make up some interesting weather. What was predicted as 12-14 knots off our starboard beam is going to turn into nastiness on our nose. We had better fuel up before it hits.”

The wind went quiet and the night took on a grayness like it often does before a big blow. At around two in the morning we pulled into Cobb Marina in Little Creek, Virginia located just down river from Norfolk. There were a lot of other boats at the docks getting ready to run south as well. When the fuel dock opened at 8 a.m., we sloshed in 28 gallons and were away 15 minutes later.

Although we knew the weather was closing in, right at this moment the wind was only about 5 knots on our bow. With the big diesel purring steadily under our feet, we cleared the harbor and headed south. It was not long before we felt the temperature drop as the fronts were about to collide.

In a matter of two hours the wind built to 30 knots and lifted to the south-southeast. The temperature dropped into the low 30s and it began to rain. Gentle at first, slowly building into a downpour. Ominous thunderheads rolled over us like raucous battalions of warring armies. The edges of the clouds looked burnt from the fury of the bolts of lightning smashing into the inky ocean that surrounded us. Thunder drummed the fragile membrane of the sky.

The bow of the 50-foot Jeanneau dove down into a black hole in the ocean, piercing the bottom of a ten-foot, white-capped wave. Ragnar shuddered at the collision and then valiantly struggled up and forward as the grey water washed over the deck, parted at the mast and then streamed off the stern.

Sean, bundled up in two layers of thermal underwear, a sweater, foul weather gear, watch cap, and mittens clung to the wheel like the captain portrayed by statue in the Gloucester Harbor. We both had our lifejackets clipped into the line we had run around the center console. I held fast to the rails with my feet braced against deck. My own body was protected by similar layers of underwear and my Grunden Dark and Stormy rain gear.

Our four-hour shift was going to be three hours too long! Every time the big boat slammed into a wave, the transmitted energy from it shocked us to the bone. My back and legs were sore from the bashing. Sean tried to ease the boat up the waves and slide around the curls, but for Tony and Doug trying to sleep below, the rocking and rolling made it almost impossible to relax.

Hour after hour we drove south. Annapolis was far behind and Charleston was too far ahead. Making about 5 knots over the sea, it was going to be a long, hard run. Delivery sailing sounds like fun until you are forced to run through a sustained storm. That edge where the two systems were colliding squeezed everything together, resulting in 30-knot winds gusting to 35 and, at times, a hard, pelting, cold rain that just pounded the surface of the boat.

I looked over at Sean as he battled a particularly big wave and hollered.

“Are we having fun yet?”

He grinned back and would have given me the finger if he could have let go of the wheel.

After about 20 hours of this beating we pulled into Gulfport, North Carolina. Looking like drowned rats, we tied the big war horse to the dock, cleaned up the gear and headed for the nearest hot shower. Although the rain had stopped, it was still cold and the wind howled across the bay. It was the day before Thanksgiving.

We caught a taxi to Charleston and each of us flew in a different direction to be home for the holidays. We reconvened three days later, all refreshed and ready to continue the journey. Scott flew in to join us. Charleston, Fort Lauderdale and around the corner. The big boat just slid along in a steady brisk westerly, the sails pulling us along at around eight knots. No drama, just hour after hour of steady movement as the temperature slowly rose and layers of clothes disappeared below. No boots and rain gear. Each watch allowed a steady lessening of gear. Soon it was just shorts, river driver shirts and boat shoes.

At Key West we docked the boat, and the boys hopped a plane back to Washington to work while I cleaned up and tended to the little chores that always need to be done. The owner will fly down in a few days, but until then I have the boat to myself. Tonight I think I will prepare conch soup, blackened fresh grouper, a warm tasty flan, accompanied by a chardonnay chilled to 55 degrees. I will sit on the gently rocking deck and watch as the fiery sun eases down into the western horizon. Delivery complete.

Dr. David and Mary Gayle Sartwell are an award-winning writing and photography team who have published thousands of articles in both newspapers and magazines. They are outdoor people specializing in adventure travel. Both love travel, bridge, good food and wine, fly fishing, and outdoor adventure of any kind. 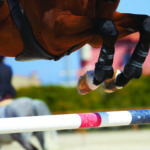 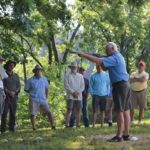 Next Story
James Rutland and the Instinct-Shooting Method