Understanding and Developing the Proper Approach

The complexity and challenge of sporting clays can leave even the most experienced shooters scratching their heads.

Sporting clays is far from easy. Just when you think you found the method that works best for you, you may find that your approach seems to leave you with less than desirable results. Over the last 20 years, in an effort to the fix the flaws in my shooting, I have developed what I call a “dynamic approach.” A dynamic approach is a combination of a few shooting methods. You must first understand a few core principles before you can select and pair methods with different situations.

Before moving on, I feel it is important to give credit where credit is due. I honestly could not have developed this approach without the instruction I received from Dan Carlisle at a young age. My approach is based on principles that have become a fundamental part of my shooting.

So, what are these core principles? I believe the most critical principle in determining how to approach a target is related to the visual clarity of the target. Simply put, the break point/zone is where you see the target the clearest, or at the point of the target’s flight where the target looks the biggest.

Determining the angle of a target is a critical consideration when deciding which approach to use. Is the target crossing, shallow-quartering, deep-quartering, incoming or quartering-in? As you will learn, the angle of the target informs your decision making.

You also need to identify scenarios that call for shooting using a pre-mounted (high-gun) or unmounted (low-gun) approach. There are other important questions you need to answer. Which method should I use to establish lead? Where should I insert the gun relative to the target? Should I use a form of the maintained-lead method, such as “move, mount and shoot?” Should my gun ever start behind the target? If so, what type of target?

When do I shoot from a pre-mounted gun? If so, when do I use this approach?

It is important to be able to shoot from both pre-mounted—in the cheek and shoulder—and low, unmounted gun positions. Keep in mind using a low-gun or unmounted position means having an actual mount, not just lifting your head. Moreover, how low the gun starts in your shoulder can vary depending on the amount of time you have for the shot.

Let’s begin determining when you should use a pre-mounted gun? You must always pre-mount on anything that you would consider a going-away shot or a “trap-style” target. Specifically, you can pre-mount anytime the trap is located between 5 and 7 o’clock on a if you are standing at 6 o’clock.

As the angle of the target becomes greater, there becomes a point where you may want to shoot low-gun or un-mounted. If the traps are at 4 or 8 o’clock while you are standing at 6 o’clock, the decision to pre-mount or shoot low-gun depends on speed and distance. If the target passes the point where you see it the clearest before you can mount the gun, then I recommend shooting pre-mounted.

Ultimately, your decision is based on break point, time and angle. When shooting pre-mounted, the most important variable will be your hold point.

When do I shoot from an unmounted gun? If so, when do I use this approach?

When does it make sense to use an unmounted gun or shoot from a low gun? Starting from an unmounted gun position will give you plenty of time when shooting crossers and targets. There is a distinct advantage of a low-gun approach when shooting crossers—the movement of the gun to your face gives you timing and enables your hands and eyes to work better together. This approach frees your vision and likely improves your hand-eye coordination.

The purpose of a gun mount is to merge the gun and bird together seamlessly. If you feel very uncomfortable shooting from an un-mounted gun, then you may want to practice your gun mount at home or simply shoot all shots from a pre-mounted gun position until you feel comfortable with your gun mount. The diagrams at the end of this document illustrate different angles and the appropriate approach.

How do I establish lead?

On shallow quartering, targets are best approached by mounting on the back edge and stretching to the front by moving slightly faster than the target. As angle, distance, and speed are increased, you must insert the gun farther in front of the clay. You will develop a relative inventory in your mind of where to insert the gun relative to the clay. Do not worry about lead in exact measurements but only in rough relative terms. You need to learn to trust your eyes and let them finish the last part of lead.

In the long-run lead is much more of a “feeling” than a picture. Use the diagrams in this article as a means to reference insertion points of the muzzle relative to the clay.

Use a form of maintain lead when you have limited time to establish lead. Choose this method when the target looks the clearest for a short period of time and then turns on edge, or when you are trying to shoot the first bird of a pair rather quickly to get to the second target. Use this method if the presentation does not give you enough time to meet the target and “stretch” or pull away to finish the lead.

When time is limited, you will be forced to use maintain lead as your method to establish lead. Maintain lead is defined by the muzzle starting ahead of the clay with enough forward allowance to break the target. Remember, to shoot a trap-style target quickly, you must pre-mount and use a maintain lead. However, if the target is more of a crosser and you need to shoot quickly, use a lower-gun and shoot a form of move, mount and shoot. In this instance, use the timing of your gun mount to establish the lead so that once the gun meets your face, you fire. Refrain from using this method if time allows you to use more or a traditional method of moving with the target and pulling away.

You should now have a better understanding of how to determine the correct approach or method in sporting clays. Remember to start off by picking a breakpoint or break zone where you see the clay the best. Determine the angle, speed and distance to help you decide what approach is best. Pick a method that does not let the speed of the gun deviate greatly from the speed of the target. Once you have developed a solid technique, you must learn to trust your eyes. In shooting we must learn to look hard at the clay to let the eyes “finish” the lead. This is the “feel” part of the game that we experience in any sport.

Anthony I. Matarese Jr. began shooting when he was six years old. At age 10, he started shooting competitive sporting clays and studying the art of shooting under the guidance of Olympic Medalist Dan Carlisle. Matarese is recognized as one of the top competitors in the world; in 2014, he became the youngest member to be inducted into the National Sporting Clays Hall of Fame. In 2016, became the first American to win the World English Sporting Championship. He is the founder and chief instructor at A.I.M. Shooting School (www.clayshootinginstruction.com). His family owns M&M Hunting Preserve (www.mmhunting.com) in Pennsville, New Jersey. 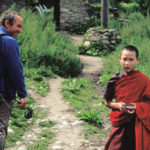 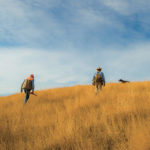