Fly Fishing for Smallmouth Bass on the New River

Whether you’re looking to float for smallmouth bass or wade for trout, spending a day on the water with Wesley Hodges is a day you won’t soon forget.

The cicada fly landed loudly and created a small wake after it hit the water. Beneath the surface lay a deep section of river littered with boulders and sunken trees. My quick mend of the line created a good drift in the current.

I didn’t see the fish swim up to the fly; the fish delicately opened its mouth and I suddenly noticed an empty ripple where my fly once lay. I set the hook. The fish dove for cover but I stripped line to keep it away from deadfall and rocks on the bottom.

The fish pulled line from my hand, but I was able to make up ground. I felt it rise and watched the 22-inch smallmouth bass leap three feet in the air above the New River—the second oldest river in the world.

I booked the trip after checking my Instagram feed at the right time; a Virginia guide advertised a special rate after a client canceled at the last minute. Driving along the winding roads of southwest Virginia, I rolled through the morning fog and passed by country stores where, outside, old men sipped coffee from Styrofoam cups. I parked at a busy gas station and shook hands with Wesley Hodges.

“You’re going to use a 7-weight with floating line and target fish feeding on the surface,” Hodges explained. “Big smallmouth bass don’t always blow up on a fly the way largemouth bass will. Big smallies are more subtle and behave similar to brown or rainbow trout.”

The guide inspected his drift boat and trailer and then invited me to hop in the passenger seat of his Toyota Tacoma. I noticed we shared a similar taste in music and mouth tobacco: a can of Copenhagen rested in the center console and The Dead South’s “In Hell I’ll be in Good Company” played on the radio.

The drive to the river took 15 minutes. We put in and drifted with the current. Hodges handed me a 7-weight with a yellow popper attached to the end of the tippet.

“With these poppers you don’t want to make them gurgle too loud,” he said. “The big fish like a fly that’s slowly worked and drifts well.”

I followed the guide’s advice and quickly landed a nice smallmouth. We drifted past grass and I caught more fish. Hodges navigated to the shady side of the river after the sun rose above the tree line and the fog burned off. He advised not to let the fly land so gently on the water—I wasn’t throwing size 18 flies to brook trout, he said.

“Smallmouth like action and that loud splat will bring them in.”

This sounded more like sacrilege than instruction to a brook-trout angler like me; poorly thrown flies spook trout on mountain streams. But I did what I was told, and it took a little getting used to. Hodges reminded me throughout the day to land my fly hard.

Just before noon, the temperature rose, and the bite cooled off. Hodges switched my fly to a cicada imitation and I cast towards overhanging tree limbs and other structure. I caught a few more smallies that way and the heat started to take its toll on both of us.

It was a balmy 91 degrees, but we still needed a break from the sun. Hodges dropped anchor in the shallows beneath in the shade of a tree. We ate sandwiches and swapped stories about life off the river. I learned that Hodges had served in the military and had a baby on the way. He also told me he was once held hostage by crackheads in a Myrtle Beach hotel room. (If you’ve been to certain parts of Myrtle Beach you’ll understand.) People and fly fishing guides in particular, live interesting lives.

After lunch we continued on our New River journey. The guide avoided a stretch of water dirtied by a muddy connector stream and discovered clearer water and plenty of grass and submerged timber for me to cast toward. I took a few more smallies on the cicada fly, but they weren’t very big. The afternoon sun began to set and there was more shade along the banks.

“There’s only one more hole to hit before the boat ramp,” said Hodges.

Luckily it was a large hole—with big fish. We spotted one and screamed with delight in unison when I set the hook.

“Dallas, that’s a certification smallmouth—it must be 22 inches long. People fish this river for decades and don’t hook one this size.”

I worked to keep the bass off the bottom of the river to avoid tangling and breaking line on whatever gnarly structure the fish could find. I kept the line tight and the rod firm in my palm. Fearing the tippet might break, I gave line when the fish ran and then pinched it tight until my forearm burned.

Hodges coached me: “Keep him up near the surface.” Then he argued with himself: “Damn, should I anchor the boat? No, I should keep floating and I’ll keep steering. Oh the hell with it—I’m gonna anchor.”

The guide dropped anchor and the fish continued to fight. Each time I brought it to the surface it dove right back down. The battled waged on. At one point the fish resurfaced and Hodges attempted to net it by stretching half his body over the side of the boat. He missed and the smallie disappeared. I gave it a little more line to release tension on the tippet as it dove back down. But this time that was where it stayed. My rod went limp; taut line slackened. The fish was gone.

We sat in silence. I didn’t cast, Hodges didn’t row. We moped, disappointed by missing a trophy smallmouth bass.

I sighed. “Let’s go catch another one.”

Hodges tied on another cicada fly and we continued drifting the last hole. I cast a few more times but had nothing to show for it. Near the end of the run, we saw a fish slowly rise to my fly and suck it down gently. I set the hook and my orange line tightened, spraying water in the air. Just as before, the bass ran deep towards the safety of timber and rocks, but this time I didn’t let it win.

I fought the fish and it jumped a few times, revealing the size of another good smallmouth. I pinched the line hard between my forefinger and the corked rod handle and didn’t give the fish another inch.

I wrangled it close to the boat and Wes quickly nabbed it with the net. My prize was another good smallmouth bass — an 18-incher. It wasn’t the 22-incher, but an 18 is nothing to scoff at and evidence of a good day on the water.

Book a trip with Wesley Hodges at wesleyhodgesflyfishing.com.

Dallas Hudgens discovered his passion for fishing on Virginia’s suburban public lakes. In his youth, he pursued bass with a baitcaster. Today he lives in the heart of the Blue Ridge and enjoys fly fishing for brook trout in the mountain streams of his home state. 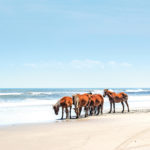 Previous Story
The Wild Horses of Corolla in the Outer Banks
→ 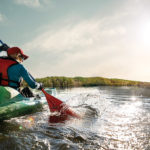 Next Story
The James River Makes a Comeback