The James River Makes a Comeback

Normally Street travels the halls of the Virginia General Assembly, the highways of the James River watershed and the James itself—by way of kayak, canoe, bateau and pontoon boat—lobbying for clean water and river health.

A flight halfway around the world was out of the ordinary for Street, but the business of championing “America’s Founding River” has suddenly become global. As a current member of JRA’s board of directors, I want to share the reason for, and the significance of, his international flight.

The James River’s headwaters begin in Alleghany County, where the Jackson and Cowpasture Rivers converge. It flows 347 miles through farmland, towns and cities, past manufacturing plants and historic plantations, and empties into the Chesapeake Bay.

More than 2.6 million people live in the James River’s 10,000-square-mile watershed, which covers one fourth of the Commonwealth. While pollution discharged from large industrial and sewage plants has been largely regulated and reduced, the human impact of farming, development and daily modern life still greatly affects the river’s health. While challenges remain, the James River is making a tremendous comeback.

When I was a kid, no one swam in the James. Old-timers claimed the river water peeled the paint off their boats. In fact, the James was considered one of the most polluted rivers in North America—and for good reason.

In the mid-1960s, Allied Chemical Corporation began illegally dumping Kepone, the chlorinated insecticide it manufactured in Hopewell, Virginia, directly into the James. The company continued to poison the river with this unregulated industrial waste for more than a decade. People began to question the practice after workers at the plant began experiencing symptoms that included uncontrollable shaking and blindness.

Findings from a subsequent investigation were shocking. Kepone was found in the river, in the fish, in the soil and in the workers—all were poisoned. Virginia Governor Mills Godwin banned fishing on the James from Richmond to the Chesapeake Bay; the ban lasted 13 years. Communities and fishermen that once considered the James their lifeblood were devastated. The Kepone environmental disaster—not to mention years of neglect, overfishing and other pollution—prompted action.

In 1976, a group of citizens founded the James River Association to serve as a voice for the river and to protect and restore its health. Since then, our member-supported, non-profit organization has worked to educate people who live in the watershed to understand environmental impact. We want to connect people to the river. Whether you fish, paddleboard, bird watch, boat or simply cross the river on your way to work, each of us has a part to play in the ongoing comeback story of the James.

In 2018, more than 10,000 school children participated in JRA environmental education programs. Our organization also patrols more than 1,000 miles of the James and its tributaries through our Riverkeeper and volunteer RiverRat programs. During the past six years, we have also added 37 new access points to those waterways.

“The James River improved from a C+ to a B- in 2017. There were improvements in aquatic grasses, water clarity, and total phosphorus. Over time, this region has a significantly improving trend,” UMCES stated in its report.

Similarly, JRA produces a State of the James report, which shows that the health grade of the James River has improved from a low D to a B- minus in 2019.

Street had a good story to tell when he arrived in Australia.

“I am extremely proud to have the opportunity to share, on a global stage, all that JRA has accomplished in its 43 years,” he said.

Street’s travel to Brisbane was long but worthwhile; it mirrors the journey of the JRA and the river for which it advocates. America’s Founding River won the 2019 Thiess International Riverprize. After traveling all that way, Street accepted the award on behalf of the JRA and our members, donors, volunteers and partners.

“Rivers represent just one drop of every gallon of water in the world, yet that one drop touches all of us,” Street said in his acceptance speech. “Congratulations JRA. Let’s keep the comeback coming.”

“The James River is a shining example of conservation and river stewardship. I’m proud that Virginia’s own James River is receiving the prestigious Thiess International Riverprize, helping Virginia showcase the improvements and important work of many public and private partners across the Chesapeake Bay watershed to bring the river back to life over the past 40 years. Restoring the James has led to immense positive impacts for our people, our economy, and our environment in the Commonwealth, and we intend to continue this upward trajectory and finish the job.”

The story of the Atlantic sturgeon is a vivid example of the James River’s return. Sturgeon are an ancient fish, living fossils that have been around for 120 million years. They spend their adult years in the Atlantic Ocean and return each spring and fall to spawn in the rivers where they were born. Once common in the James, commercial harvesting and a lust for caviar decimated the population in the late 1800s. The fish was listed under the Endangered Species Act in 2012 and has been compromised since 1997.

JRA partnered with other environmental organizations to construct three experimental spawning reefs in the James downriver from Richmond. In 2004, a yearling sturgeon was captured in the James—proof that sturgeon are reproducing in the river.

During spawning season, JRA hosts sturgeon-watching paddles and boat rides. This past fall, there were more than 30 sightings of the famous sturgeon breach; rocketing straight out of the water like a missile, the fish breaks the surface of the water—and for several gravity-defying moments, flies directly up in the air—then slams down with a reverberating, belly-flop landing.

No one really knows why sturgeon breach; there are a number of theories. The one I like the most speculates the fish is just having fun. In fact, the fish is so fun it has a beer fittingly named after it: The Great Return IPA. The West Coast Style IPA is brewed by Hardywood, a craft brewery rooted in Richmond. Hardywood contributes $5 per barrel of The Great Return to the JRA.

Try one. I did, and it reminds me of a comeback river and a fish that’s trying to make a great return home.

Patterson Cunningham is an active supporter of the James River Association and a member of its board of directors. Born and raised near Charlottesville, she is an educator and freelance writer who is interested in conservation, travel and the outdoors. 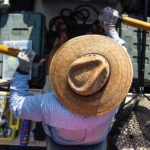 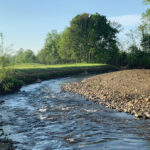