Finding a Home on Mint Creek 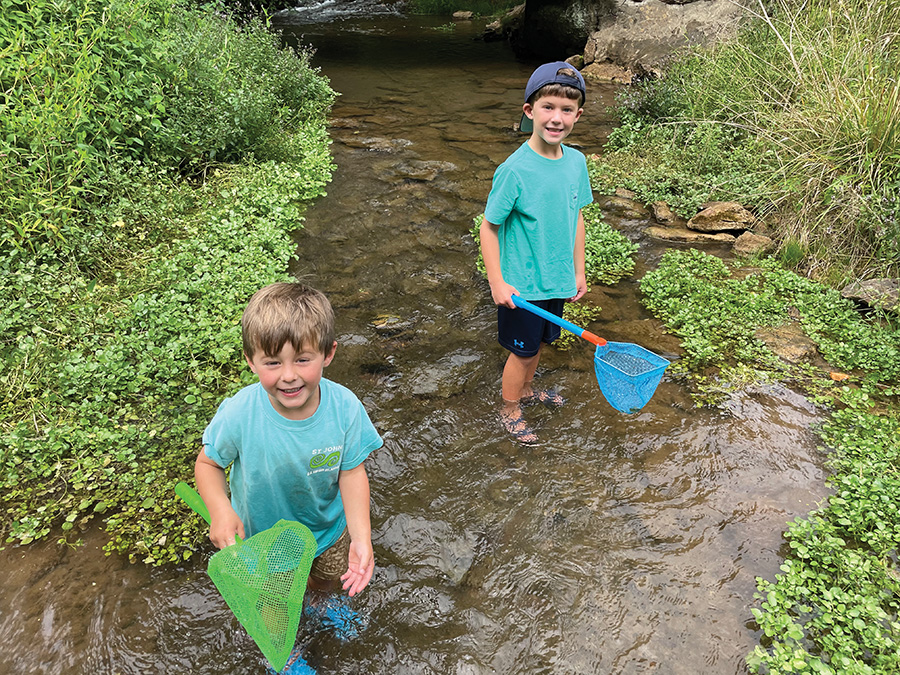 Since I was a child, I’ve correlated casting to rising trout with mortality. This hard-grained association began in my mind after I sat in a funeral home in Falls Church, Virginia, in 1992. I sobbed as I listened to my Uncle Steve eulogize my grandfather by telling stories of the fishing trips when he taught him and his brothers how to fish for trout.

I never really knew Paw Paw, but I inherited his knockoff Pflueger reel and Sears fly-tying kit soon after he died, when I was seven years old. It was less than a year after I’d first seen “The Movie” (“A River Runs Through It”), and I began to imagine that Paw Paw existed as our family’s own Norman Maclean. I would spend decades trying to realize his true legacy.

I first fly fished in Shenandoah National Park during my freshman year of college, when I caught my first wild brook trout and found comfort in the unrivaled privacy provided by wild places; granite canyons and the sound of roaring water instantly transported me to a place of peace.

The author fished Mint Creek during his rare free time in recent years, catching fish and appreciating their coloring, which reminds him of fish in western streams.

After some years of exploring the broader East for trout, I eventually found myself wading along the banks of the Big Blackfoot in Montana, where I held my first wild 20” trout in the rain, then caught another on my very next cast. During that afternoon, far from home, I had a childhood memory of casting with Paw Paw’s reel in our tiny suburban front yard during a thunderstorm. The rainwater that day washing down our suburban street gutters roared as mighty in my mind as the river I now stood upon. This, I thought, was the place I would find myself at last.

It was long enough ago—14 years—that some of the details are a blur, but what a summer it was. As my shadow was cast against the wildest rivers and the biggest mountains I’d ever seen, I forgot about the finicky, overfished trout in eastern streams. I slept beneath the stars in the Bob Marshall Wilderness after watching fat westslope cutthroat lazily sip my hopper patterns until the sun set, and I could no longer see my fly. Even then, the fish would eat in the dark.

Between my final college classes at the University of Montana, shifts at the local pizza place and my adventurous days astream, I was in a sublet room near campus reading the famous fishing stories of Harrison and McGuane, David James Duncan, Jim Babb and others, naively imagining that one day I might die happy alone in a cabin next to a fabled river.

The truth is, though, I never found myself in Montana—I felt lost being so far from the family and friends who I loved, and with a lonely Rockies winter looming and my job prospects stuck at minimum wage, I ended my epic western adventure earlier than expected.

Anderson traveled the country to find a destiny that he ultimately found at Mint Creek, just miles from his grandparents’ home.

Soon after I came home, I accepted my first “real” job at Trout Unlimited. My office was just down Arlington Boulevard from Nana and Paw Paw’s home in Falls Church, which allowed me to spend time with my grandmother as we both grew older. I visited her after work, and we spent hours swinging on her front porch and sharing old-time conversations while surrounded by family memories. She had a wall clock in her living room that had now been empty for as long as it was once full of her family. Nana also had two tall bookcases, where pictures of her children and their children collected dust. Her famous flower garden still bordered the front yard, and out back there was a vegetable garden where my father and his brothers still tilled new rows for her every spring.

I knew a little bit about my grandparents’ younger years because after my grandmother became a widow, her children encouraged her to write a book of her stories to help her grieve. She agreed, and they employed a local adjunct English professor to help her pen her stories that began before the Great Depression on a 250-acre self-sustaining farm in Grayson County, Virginia, where fresh berry pies cooled on windowsills, and everyone understood the merits of a hard day’s work.

My grandmother wrote about how she and Paw Paw and many of her 13 siblings left the Appalachian Mountains forever for the I-95 corridor of Maryland to support the country’s war efforts. She took a job at General Motors Aircraft in Baltimore riveting the hulls of warplanes, and Paw Paw enlisted in the Army in Havre De Grace. Soon after they relocated, however, the final bombs fell on Japan.

Paw Paw came home without having been deployed, as neat and clean as Nana had remembered him during their youth. They were married on Dec. 16, 1946. A few years later, they bought the home on Irvington Road where we were sitting six decades later; they raised their five children there with the type of love that she learned about growing up in “the country.”

My grandmother retold many of her stories, but we never talked about the later chapters in her book, in which she describes the pain and sadness she felt when Paw Paw suffered from a brain aneurysm, or when he was later diagnosed with leukemia.

Instead, we talked about fishing. She told me of how she would nap in their Buick sedan, the one still parked in front of the house, while Paw Paw fished his favorite trout streams.

Nana and I laughed together beneath the stars every week for a few years, “shooting the breeze” as she always said. Soon she would be gone too, and less than a year later my wife Katie and I would start our own family. As a young husband, and eventually a young father of three boys, there was precious little time to travel the country to pursue my fly-fishing passions, so I set out to find wild trout as close to my door as I could.

Remarkably, I discovered a place called Mint Creek just a few miles from the hospital where I was born.

I fished Mint Creek during much of my limited free time in recent years, learning to catch fish with bulging chrome sides, crimson slashes and lavender cheeks and peppery black spots that give the illusion of the fish I once sought in the pristine mountain streams of the West. These fish, however, thrive in the very heart of suburban sprawl, alongside a busy highway where there are no fabled hatches or anglers’ parking lots.

Tonight, on a cool spring evening, I’m here without a rod because the sun sets fast this time of year, and I need to be home in time for bedtime stories.

Ephemeral flowers line a hidden path that I would have once walked with the reckless ambition of a young fisherman. Eagles and egrets soar silently overhead, and a few green-winged teal dabble in the braids of a creek.

The author called his grandfather, Stanley F. Anderson Sr., the “Norman Maclean” of the family.

When I’m here, I think about a lot: the fading light behind the Blue Ridge Mountains where I stretched my first casts; my first smell of wildfire smoke in Montana, and each new fish from Mint Creek that I held in the palm of my hand as my world changed forever. Mostly, I think about a man I knew so little but who taught me so much, and a woman who tied the threads of family and history together like no one else could.

It’s a cool spring evening, and I’m here without a rod. The sun sets fast this time of year, and there are bedtime stories to be told. Thanks to my grandmother, there will be no shortage of those to share. I climb the banks to my car. I may be leaving the water, but I know it will never leave me.

Chris Anderson is the owner and operator of Birch Street Construction Management (www.birchstreetcm.com). He lives in Northern Virginia with his wife and three boys, where he is accustomed to the churn of construction equipment but still finds wildness in a few remaining untouched corners where trout remain. He dreams of bigger trout in faraway places but prefers to fish close to home with his boys.