Craft Spirits of the Commonwealth

We sampled some of the best from Virginia’s thriving distillery scene.

For many, staying close to home in recent months has meant sitting on the porch with a glass of bourbon or a creative cocktail. With fall looking like it will be much of the same, it’s a perfect time to stock your personal bar with spirits made in Virginia. It also happens to be a milestone year for distilling in the Commonwealth, as 2020 marks the 400th anniversary of Virginia as the Birthplace of American Spirits.

Back in 1620, Virginia colonist George Thorpe made what’s known to be the first batch of corn whiskey at Berkeley Plantation. In the centuries since, the tradition has been carried forward on both open farms and in tight city blocks. Currently, there are 73 licensed distilleries in Virginia, with a burgeoning craft scene producing everything from small-batch bourbon to organic moonshine. Here’s just a small taste of the excellent spirits being crafted in the Commonwealth.

The husband-and-wife team of Scott and Becky Harris founded Catoctin Creek back in 2009, and since opening Loudon County’s first legal distillery since Prohibition the couple has won a big stash of awards for their high-quality spirits made with organic ingredients. Most popular is  the flagship Roundstone Rye, a pre-Prohibition-style rye whisky that’s aged in Minnesota white oak casks, creating a smooth profile with a sweet and spicy balance that feature notes of caramel and rich butter toffee. Gin fans should also make it a point to try Cactoctin’s Watershed Gin, which is made with a secret recipe of herbs and spices, offering an earthy crispness that’s a great base in cocktails both classic and creative.

Cocktail Hour: Catoctin’s owners have compiled a generous collection of cocktail recipes on the distillery’s website. Try the Maple Whisky Sour, which includes two ounces of Roundstone Rye, an ounce of fresh lemon, and half ounces of orange juice and maple syrup. A half ounce of aquafaba is optional. catoctincreekdistilling.com

The husband-and-wife team of Scott and Becky Harris founded Catoctin Creek in 2009, Loudon County’s first legal distillery since Prohibition. Subsequently the couple has won a big stash of awards for their high-quality spirits made with organic ingredients to create a variety of flavors. Options include Cinnamon and Cocoa Whiskeys, but we were partial to the Lemon, which features MurLarkey’s award-winning Justice White Whiskey aged in in oak barrels over lemon peels. It adds a nice citrus accent to the bright bite of a spirit made from Virginia-grown corn and barley.

Cocktail Hour: A favorite MurLarkey Recipe is an Irish Lemonade, a simple and refreshing cocktail that features a shot of the Lemon Whiskey with 3.5 ounces of your favorite lemonade and two mint leaves, shaken with ice. murlarkey.com

A former microbiology professor at the University of Virginia, Ian Glomski left the world of academia to apply his science background to a new pursuit—distilling. Five years ago he founded Vitae Sprits, which makes premium small-batch rum and gin from an industrially hip building in downtown Charlottesville. The Platinum Rum is a clean and clear spirit made from Blue Ridge Mountain water, American sugar cane molasses and yeast that has plenty of sweet notes of caramel and vanilla.

Cocktail Hour: Vitae has a huge list of cocktail recipes on their website. With the Platinum Rum, make the Perfect Pear, a great fall cocktail that features one and a half ounces of the spirit, one-and-a-half ounces of mulled pear nectar, three ounces of sparkling apple cider and a slice of lemon. vitaespirits.com

While most distilleries offer a variety of spirits, the owners of Reservoir stay focused on whiskey—all made from grains sourced within 40 miles of their small operation in Richmond. Reservoir—located in RVA’s brewery-heavy Scott’s Addition neighborhood—started in 2008 with three main whiskeys, all made solely with different mash bills: wheat, corn and rye. A few years ago, though, the distillery released Hunter & Scott, a smooth, balanced bourbon that combines all three. With a notes of butterscotch and cinnamon, it’s a richly flavored bourbon that’s great on the rocks.

Cocktail Hour: We went classic with the Hunter & Scott Bourbon and made an excellent Old Fashioned: the whiskey, bitters, muddled sugar and garnished with an orange peel. reservoirdistillery.com

Made in Newport News

Heading east to the Tidewater, Ironclad is another outfit that devotes stills to crafting premium brown water. As the owners of the family-owned operation put it, their mission is “to create the best bourbon—from grain to glass,” and they certainly make a case for greatness with their Small Batch Bourbon. The 90-proof spirit is made with Virginia corn, wheat and rye; while aging in charred oak barrels, it’s imbued with the character of the brackish waterfront air, resulting in sweet notes of caramel with a spicy finish.

During Prohibition, Franklin County, Va., was known as the “Moonshine Capital of the World” for the large amounts of bootlegged corn liquor being produced in the area. To the north in Richmond, the distillers at Belle Isle Craft Spirits fortunately don’t have to worry about evading the law as they craft modern-day moonshine made with 100-percent organic corn. Belle Isle’s flagship Black Label is a surprisingly smooth sprit on its own, but the distillery also infuses its ‘shine with some natural ingredients to create variations like Belle Isle Honey Habanero and Cold Brew Coffee—the latter a collaboration with Blanchard’s Coffee Roasting Company.

Cocktail Hour: No need to practice your mixology skills with this one. Belle Isle makes canned cocktails, including the sparkling Honey Hab & Pineapple, a refreshing combination of organic moonshine, real fruit and just the right amount of fizz. belleislecraftspirits.com

This single-barrel whiskey was named the World’s Best Bourbon in 2017—one of many accolades for this lauded bourbon made by the Fredericksburg-based distillery and named after the great, great uncle of A. Smith Bowman’s namesake founder. With rich notes of toffee, fig and almonds, it’s a perfect whiskey for sipping by a backyard fired on crisp fall evenings.

Cocktail Hour: We like this one neat, but if you really feel like a cocktail, try the distillery’s autumn-ready recipe for Maple Cinnamon Bourbon, which features fresh lemon juice, maple syrup and a pinch of cinnamon. asmithbowman.com 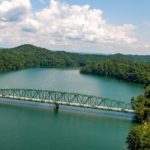 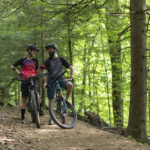 Next Story
Biking in Bristol VA/TN