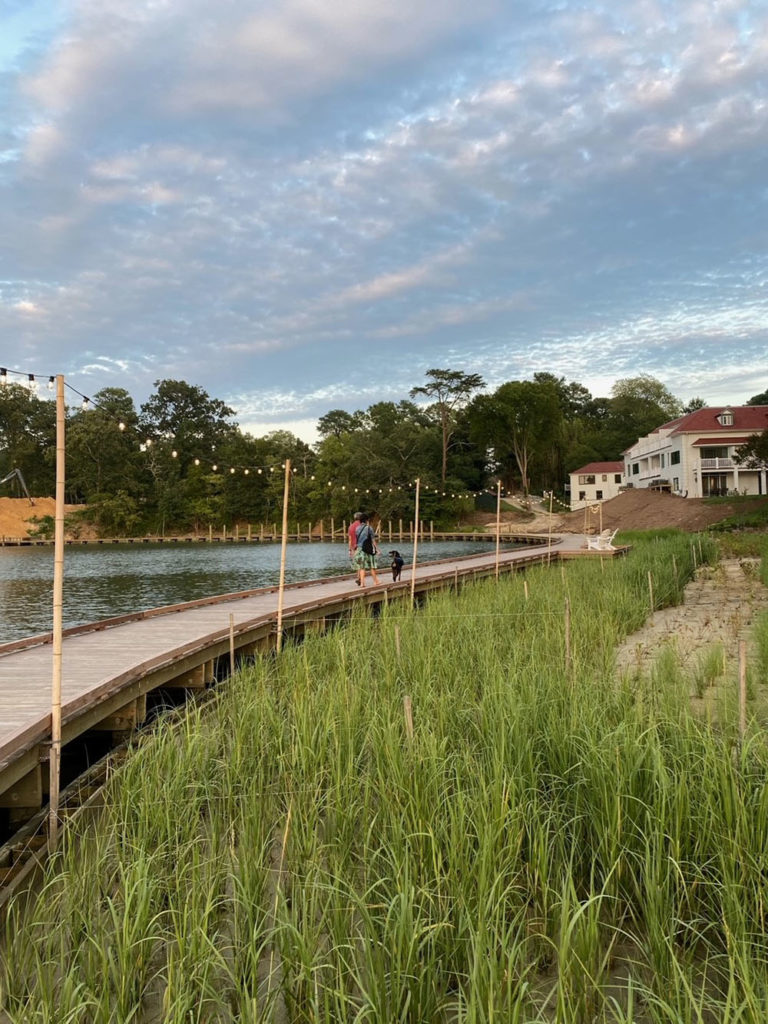 In Irvington, The Tides Inn Is Connecting to Its Environment—and a New Generation of Guests

It’s 3 P.M. on a late May afternoon and Will Smiley is shoveling one-year-old oysters out of a cage craned up from the water, into his 15-foot boat on Carter’s Creek in Virginia’s Northern Neck. The resident ecologist at the Tides Inn rinses each off, separates them by size and saves the largest ones for roasting on his dock a half-mile across the creek from the inn. The smaller ones? They go back to the cage and into the water.

Next, he hauls up a crab pot and dumps a dozen eight-to-twelve inch jimmies—fat, heavy and blue-clawed—from trap to bushel. They’ll make their way into his steamer, turn bright orange in minutes and taste sweet as honey at his picnic table.

A bald eagle floats above us on a breeze. Earlier we spotted an osprey with a 10-inch mullet gripped in its talons. Redtail and marsh hawks are common, the ecologist says.

Our view across the creek is to a recent shoreline restoration project the inn is celebrating, including a 1,300-foot, curving wharf walk built of Ipe posts and Kebony planks. Where trees and brush once tumbled into the creek after heavy rains, nitrogen-gobbling plants now hold bluff and shoreline together.

The wetlands plants are inserted into plain sand. “When the tides go in, they want the nutrients that come with them,” he says. “They get absorbed and get bigger and absorb more nitrogen twice a day when the tide comes in.”

This Smiley is a sharp one. He’s patented a one-man crane for anyone who wants to grow their own oysters on their own dock—and pull them up without help. Bolt his crane onto your dock post—et voila: Oyster farmers can pick up their 300-pound cages without effort. “I came up with it over a few beers, drawing it on a cocktail napkin,” he says. “Then I called one of the invention lawyers you see on TV—Smedley was his name. Twenty-one hundred dollars, and I had a patent.”

Smiley wants to teach a course in oyster gardening to anyone interested. The diploid oysters of the Chesapeake Bay and its tributaries are known to reproduce, if slowly, in the wild. But the triploids that Smiley farms from seed don’t reproduce at all. “Take out the reproduction factor, and all they do is eat and grow faster,” he says. “They mature in two years, not three like those in the wild.”

They’ll reach from one to four inches in a year, while market size is three. And they’re as sweet as the crabs, too. “Rappahannock oysters are midway between Florida and Maine,” he says. “They’re sweet because the water gets cold, and has half the salt of the ocean.”

But they’re not immune to pollution from human activity—especially nitrogen from farm and garden fertilizer, plus runoff from roads, pavements and any other impervious surface. Smiley says submerged widgeon grass is a key to clearing the creek’s water of it—the plant anchors sediment and allows small particles to drift down to it and become entrained. Oysters, too, do their share—a mature one can clean 50 gallons of water in a day. And blue crabs eat the nitrogen-fed algae.

As a natural system, it’s working in Carter’s Creek and beyond. “You can go out on the Rappahannock River and see the clarity of the water—that’s from nitrogen reduction,” he says. “If we can keep the grass growing in the creek, that’s a big step.”

Now it’s not unusual to see a pod of porpoises playing at the mouth of Carter’s Creek where it meets the Rappahannock. And Smiley’s found sea horses in his fishing nets, which is a sure sign, he says, of clean water.

A former teacher of sustainability and stewardship at nearby Christchurch School, Smiley’s a walking, talking incarnation of a new ethos at the Tides Inn. Since the late 1940s, it’s been an iconic waterfront destination for generations of Virginians 55 and over, most with household incomes of $250,000 and above. “Carter’s Creek’s the 90210 of the Northern Neck,” he quips.

There’s a lot of loyalty here—a high degree of people returning three and four times a year, using the inn as their beach house and home. Weddings take place every weekend. Couples celebrate their 45th and 50th anniversaries. Multiple generations from a single family checked in recently to celebrate one man’s 95th birthday.

These days, though, guest demographics are changing. A new and younger clientele wants to learn about the environment by getting on a boat with Smiley or out into the gardens and trails with resident horticulturalist Matt Little. “The inn’s done a good job of assembling a team on the ground and leaving a sound ecological footprint,” Little says. “We connect to our local environment and our guests go back and connect to theirs.”

The high-end, older crowd now accounts for about 25 percent of the inn’s guests, Smiley says. “I’m taking out more Alexandria and D.C. young professionals who come down to be on the water,” he says. “If you ask how they find us, they’ll say, ‘We googled waterfront resorts in Virginia and Tides is the number one resort that pops up.’”

Owners at the inn have reduced the number of rooms available, from 100 to 70, with renovations to all. Suites are upscale for guest comfort, with grand views of Carter’s Creek, the Rappahannock, and the inn’s surroundings. A beach has been restored and widened after eroding up to its bulkheads. “It took 20 dump trucks of sand every day for two weeks,” Smiley says.

The Fish Hawk Oyster Bar by the outdoor pool has a new lease on life, and new, experiential classes like Mixology 101 are offered. “There’s also the Makers Space, with pottery, nature art and collages,” says Richard Keurajian, director of marketing and resort programming. “Then there’s the chef’s kitchen, with fresh herbs and honey from Matt, for healthy cooking.”

In Little’s garden and on the golf course, fertilizer is kept to a minimum with slow-release nitrogen to reduce runoff. “We don’t use a blanket spray on all the flowers, and we’re transitioning to native plants in native soil that doesn’t need fertilizer,” he says. “That alone reduces our input—we plant petunias in summer and pansies in winter.”

Even with all the ecological emphasis at the inn, its prime attractions remain its core assets: Easy access to grand vistas, a laid-back pace for relaxation and the awesome charm of Virginia hospitality.

And, as I discovered at the Fish Hawk Oyster Bar, there’s one more. I was there for an afternoon lunch, riffling through pages of notes, marking them up and scratching out words. The bartender turned up with a glass of Sauvignon Blanc, a cup of ice, and a frown on his face.

I put away my notes and ordered the fried oysters.

J. Michael Welton writes about architecture, art and the outdoors for national and international publications. He is the author of “Drawing from Practice: Architects and the Meaning of Freehand” (Routledge: 2015) and editor and publisher of the digital design magazine www.architectsandartisans.com.