Blackberry Smoke has spent nearly two decades building a loyal following with a dynamic sound that mixes the anthemic power of Lynyrd Skynyrd with the bluesy experimentation of the Allman Brothers Band, while also incorporating a bevy of roots-based influences in between. Emerging from Atlanta in the early 2000s, the five-piece outfit initially became Southern rock torchbearers, mingling in the same scene as the Black Crowes and Gov’t Mule. But as time has gone on, the band has proven to be even more versatile.

The group’s 2015 album Holding All the Roses and the follow-up, 2016’s Like An Arrow, both topped the Billboard country chart, and on last year’s Find A Light, the band’s sixth and latest full-length studio album, it explores an expanded breadth of sonic terrain. With help from some notable special guests, the latter moves from the riff-heavy stomp of standouts “Flesh and Bone” and “The Crooked Kind” to the soaring gospel coda of “I’ll Keep Ramblin,’” which features a fierce guitar assist from pedal steel wiz Robert Randolph. Blackberry Smoke front man Charlie Starr also shares soulful vocals with fiddler/singer-songwriter Amanda Shires in the chorus of the melodic front-porch tune “Let Me Down Easy.”

Last fall, the band also released a short companion EP, The Southern Ground Sessions, which features acoustic versions of five Find A Light tracks, as well as a cover of Tom Petty’s “You Got Lucky.” Recorded at Zac Brown’s Southern Ground Studios in Nashville, the short effort offers homey, bare-bones sketches of songs like “Run Away from It All,” which becomes a warm, living-room-style meditation on the occasional need to escape.

On the heels of this concept, the band will embark on its first-ever acoustic tour this spring. Covering parts of the Northeast, Midwest and South, the Break It Down Tour includes two nights at the Opera House in Lexington, Kentucky, on March 14-15 and three nights at the Harvester Performance Center in Rocky Mount, Virginia, on March 28-30. Following the run, Blackberry Smoke will play amphitheaters this summer with Tedeschi Trucks Band on the Wheels of Soul Tour. 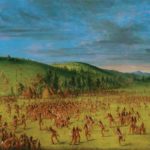 Next Story
Little Brother of War