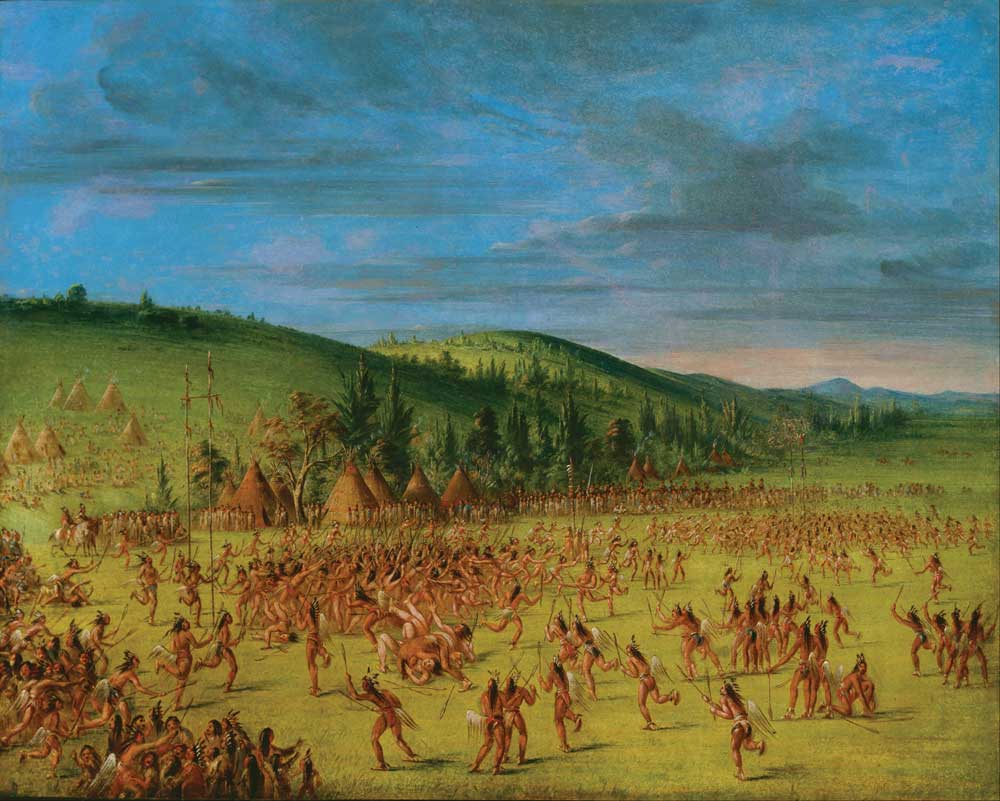 YOU COULD HEAR THE INJURED SCREAM.

Mobs of warriors fought to advance a ball—a leather object stu ed with hair—on elds with loosely de ned, unmarked boundaries. The men wielded crooked sticks resembling war clubs in a constant state of chaos. They attacked one another; wood clashed and bashed opponents. Sounds of play resembled those of bloody con ict. It is no wonder Native Americans called their game “begadwe,” or “Little Brother of War.”

Early 17th-century Native Americans believed their rugged ballgame was sacred and bestowed upon them by the Creator. The game was often played to settle tribal disputes and serve as a surrogate for warfare. Men were selected to play as much for their bravery and experience in war as for their athletic prowess. Braves painted themselves red—the color of battle—and wore breechclouts and ornamental feathers. The sticks were carved with pockets made from animal hides and hardened sinew to accommodate a ball. Each tribe may have played di erently, but the fundamentals of the collective game evolved into modern-day lacrosse.

The exact origins of lacrosse are unknown, but it was initially embraced by the eastern woodland people across that region of North America. The rst Europeans who saw them play were French Jesuit missionaries working in the Saint Lawrence River Valley in the 1630s. They were horri ed by what they witnessed: a violence that overshadowed the true purpose of the game. Lacrosse was not a form of recreation for the Native Americans. It was tied to the spiritual world and deeply rooted in mythology and the oral histories of the tribes that played it. They played “The Creator’s Game” for the enjoyment and entertainment of the Creator.

In the early 20th century, the modern game of lacrosse gained a foothold in college preparatory schools and in colleges along the Eastern Seaboard. Today it is one of the fastest-growing sports on the continent. Hard wooden sticks have been replaced with plastic heads (for mesh pockets) and graphite shafts. Players protect themselves from the inherent violence and physical contact with helmets, gloves and arm pads. The sport’s popularity has grown. People recognize the game’s beauty and speed, which is why it is often referred to as “the fastest game on two feet.”

While the sport’s rise in popularity and modi cation by Anglo-American players is generally viewed as a welcome development, lacrosse is now far removed from its roots. To many, the ritual and ceremony that was once at the core of the Native-American game has been diminished and the roles tribal warriors played in developing the game is often overlooked.

Little Brother of War’s transformation into modern- day lacrosse began with a dentist’s passion for the traditional tribal game in mid-19th-century Montreal. Dr. William George Beers grew up watching Mohawk Indians play the game with his father. The competitions they watched were chaotic and violent.

“Only a savage people could, would or should play the old [Indian] game,” Beers once proclaimed. “Only such constitutions, such wind and endurance could stand its violence.”

Beers is commonly referred to as the Father of Modern Lacrosse with good reason: He introduced rules and order to the game. Consistent with prevailing views at the time, Beers believed Native Americans and their traditions were headed towards extinction. Lacrosse, he contested, served as a vehicle for remembrance, an important institution that celebrated the native peoples of North America.

“Long, long after the romantic sons of the forest have passed away, long, long after their sun sinks in the west to rise no more, lacrosse will remind the pale faces of Canada of the noble Indians that once lorded over this continent,” he declared.

For the Six Nations of the Iroquois Confederacy (the Onondaga, Mohawk, Oneida, Cayuga, Seneca and Tuscarora), lacrosse remains a way of life today. Children are given lacrosse sticks at birth and they are rarely seen without them on the reservations where they are raised. The words Beers spoke more than 150 years ago celebrating the game remain true today; the Native American game of lacrosse and the culture of the people remain vibrant.

“This is the Creator’s Game,” said Alfie Jacques, a member of the Onondaga Nation who handcrafts world-famous traditional lacrosse sticks. “People think of the Native American as a savage, godless creature that’s out to kill people. They say we’re poor, uneducated, on a reservation, totally controlled by the white people. That’s how they like their Indian. We’re ghting against that kind of prejudice. So, we embrace one another and the game of lacrosse.”

Among the members of the Iroquois Nation, the only Native American team authorized to play a sport internationally, lacrosse provides an opportunity
for members of their community to celebrate their culture and showcase their skilled play. Collegiate and professional ranks now swell with descendants of the game’s founders.

In 2014, brothers Lyle and Miles Thompson, members of the Onondaga Nation and attackmen for the University of Albany, were selected as the recipients of the Tewaaraton Trophy, which is awarded annually to the nation’s most outstanding college lacrosse player. The following year, Lyle Thompson was again selected to receive this honor. The Thompson brothers are currently the only Native Americans to receive the game’s highest honor. 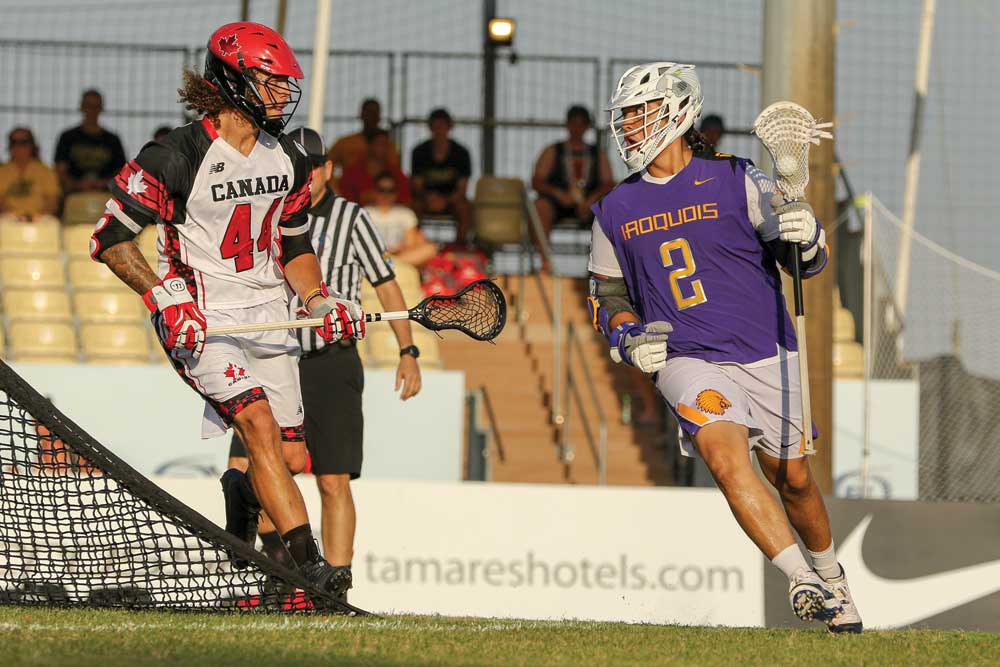 For Lars Ti any, head men’s lacrosse coach at the University of Virginia (UVA), coaching the Iroquois Nationals team in the World Games was an opportunity to honor the Native American people. Ti any was raised in LaFayette, New York, near the Onondaga Reservation, and recognized at an early age that lacrosse is more than just a game played on a field.

“The Native American players compete for a bigger purpose,” Ti any said. “They play to honor their culture and their ancestors who created this game.”

Like Tiffany, Michael Herring is from upstate New York and dedicated his entire adult life to lacrosse. In the 1980s, he was an attackman at Dartmouth. After college, he built a successful career as an independent school educator, coach, teacher and mentor. Herring is currently the head boy’s lacrosse coach at the Blue Ridge School in central Virginia. As a lacrosse coach, he led teams to multiple championships, coached All-American players and oversaw the development of student athletes who went on to play at the game’s highest levels. 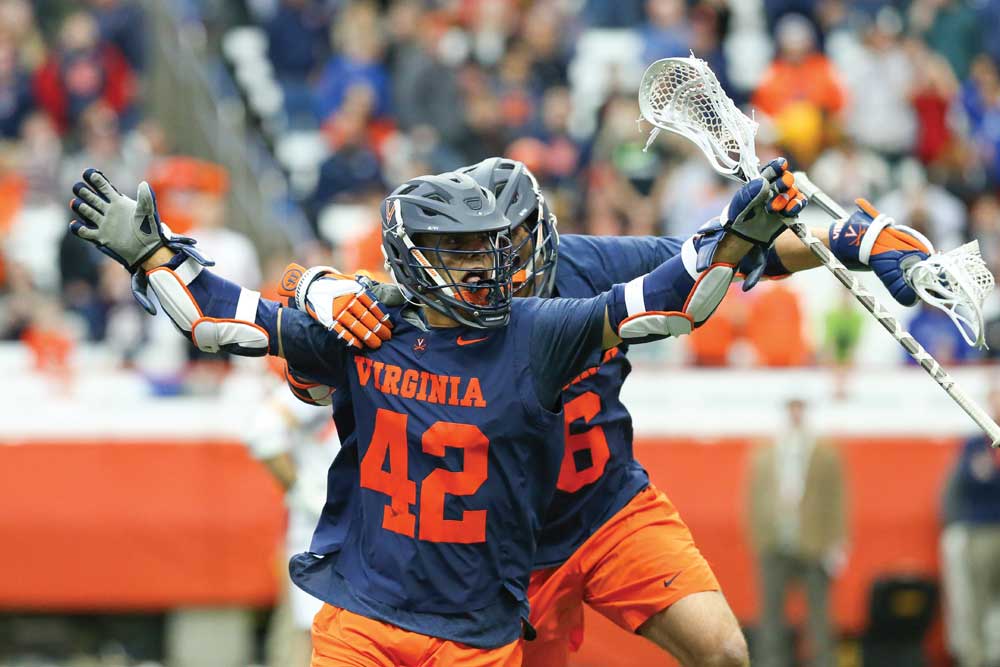 Herring grew up near the lacrosse hotbed of Syracuse. His first love was basketball, however, and he had a di cult time focusing on that sport because he is a member of the Onondaga Nation and lacrosse is in his blood. Herring’s mother was raised on the reservation and his grandmother held a prominent leadership position among the Onondaga.

“I didn’t grow up on the reservation,” Herring explained. “My mom left the reservation when she was young to go to college and pursue a career in teaching.”

Living outside the reservation, Herring was not surrounded by lacrosse like those who lived within its borders. In high school, he slowly turned to lacrosse as another athletic outlet and a way to connect with his Native American heritage.

Even though Herring and his mom did not live on the reservation, it was never far from their lives. “For my mom, there were two things that were important: Syracuse University and lacrosse,” he said.

When Herring’s son Mikey, a highly recruited high school lacrosse player, chose to attend UVA, he asked his son to call his grandmother, Marlene Dimler, and break the news that playing for Syracuse was not in his future. Dutifully, he made the call and his grandmother responded with the very same wisdom and stoicism she has demonstrated her whole life.

“Virginia is a great school,” Dimler assured her grandson. “You will get a great education, and at least I will still see you wearing an orange-and-blue uniform.”

On March 2, 2019, at Syracuse University’s Carrier Dome, the UVA men’s lacrosse team stormed back from a four-goal de cit in the fourth quarter to tie the game against the Orangemen. With one minute and 30 seconds left in overtime, UVA senior Mikey Herring took a pass from attackman Michael Kraus and ri ed a powerful lefthanded shot past the Syracuse goalie for the victory. As the Virginia players took the field to celebrate, a large Herring federation of family and friends stood and cheered. Among them was Dimler, seated just 10 miles from the Onondaga Reservation where she was born and raised, cheering for her grandson in his orange-and-blue uniform. Like the victory, the game itself is worth celebrating, as is its tradition and the culture of the people who continue to play it for the Creator. 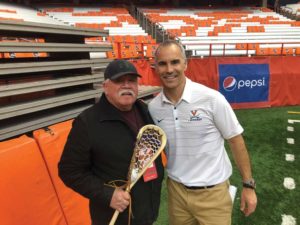 He works seven days a week from his shop on the Onondaga Nation Reservation in New York and crafts each stick by hand on a bench he built with his father in 1969.

The time and effort Jacques puts into each stick is a reaction of the love he has for lacrosse and for his people, who created the game as a tribute to their Creator. The years and toil have taken their toll; Jacques now requires six-to-10-hour days to produce 200 sticks a year, down from 11,000 sticks in 1972.

Jacques controls each step of the process, from selecting the best shagbark hickory trees to carving, bending, drying and stringing each stick. The process can take upwards of 10 months to complete and the demand for his sticks far outpaces what he can supply. Each stick is a work of art for those fortunate enough to own one. The sticks symbolize a time when Native Americans played the game, often to heal and lift the spirits of their communities.

In January 2019, Brad Tiffany, father of the University of Virginia’s (UVA) head men’s lacrosse coach Lars Tiffany, passed away at age 85. Tiffany was a former Marine who raised his family on a ranch outside Syracuse, New York. He introduced young Lars to the Onondaga Native Americans and their culture. As Tiffany climbed the ranks of Division I lacrosse as a player and then a coach, he never strayed from what he learned about the Native Americans in his youth.

After his father’s funeral in Syracuse, Tiffany was about to drive his wife and young daughter back to UVA in Charlottesville, Virginia, when he was approached by an old friend and member of the Onondaga Nation, Joe Solomon. The men embraced in the parking lot and Tiffany thanked Solomon for attending the service to honor his father.

“Before you leave, I have a gift for you from your father,” said Solomon. He reached into his truck and presented Tiffany with a traditional wooden lacrosse stick made by Jacques. “Your father asked Alfie to make this stick for you last year. Alfie just finished it and wanted me to make sure you got it. The only requirement is that you don’t hang it on a wall, you use it.”

Tiffany accepted the stick with tears in his eyes, a gift from a father to a son, honoring a game that the Native American people have given to the world. And the coach uses it every time the UVA men’s lacrosse team takes the eld. If you watch games closely, you can see the stick, slightly worn from use but proudly displayed among the modern sticks and equipment on the sideline. The stick is an inspiration and reminds UVA players that they are competing for a bigger purpose: honoring a people and culture who gave the world a wonderful game. 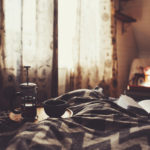 Next Story
15 Can’t-Miss Vineyards in the Blue Ridge