Many who survive the violence often encounter battles of a different nature when they return home. According to the Department of Veterans Affairs, post-traumatic stress disorder (PTSD) affects as many as 30 percent of veterans. Nightmares and flashbacks, situation avoidance, negative thoughts and hypervigilance can contribute to debilitating anxiety, depression, isolation and substance abuse. Twenty veterans commit suicide each day, comprising 18 percent of all U.S. suicides.

Current treatments for PTSD, including cognitive behavioral therapy and exposure therapy, have high dropout rates and limited effectiveness. Pharmacotherapy is another option, but studies suggest that medications may alleviate symptoms in only 20 to 30 percent of patients.

Scientists are recognizing that relationships between humans and horses can achieve a transformative quality for mutual benefit. Perhaps Winston Churchill said it best: “There is something about the outside of a horse that is good for the inside of a man.” This sentiment helps explain the rise of equine-assisted therapy (EAT) programs for patients with a broad range of mental disorders.

Like war, horse racing is ancient. Top-performing racehorses achieve glory; they attract breeders and find early retirements on stud farms. The vast majority of racehorses, however, go on to compete in lower-tier races until their bodies fail. For them, life after the racetrack is uncertain. EAT programs may offer a solution.

Anecdotal evidence suggests that EAT benefits those with PTSD, but its efficacy has not been established and the mechanism of action is still unknown. Further, there has been no standard protocol for implementing EAT—specifically how it should be delivered, at what frequency and by whom. Some programs focus on riding, while others use “ground work” with horses. There are also programs that use individual or group treatment.

Named after Man O’ War, one of the greatest racehorses of all time, the Man O’ War Project is a groundbreaking study by faculty and researchers from the department of psychiatry at the Columbia University Irving Medical Center, in partnership with the Earle I. Mack Foundation. The team has developed and is now testing a standardized method for delivering EAT therapy as an on-the-ground, non-riding, group treatment program for military veterans with PTSD. The treatment—called EAT-PTSD—was designed to address hallmark symptoms of the disorder that have a significant impact on daily functioning.

The project is the brainchild of the Honorable Earle I. Mack, the former U.S. ambassador to Finland. A veteran and horseman, Mack has long been a proponent of EAT-PTSD, a leader in horse racing and a strong advocate for thoroughbred aftercare.

“I am very passionate about two things: our veterans, who have given their lives to protect America, and racehorses, which deserve meaningful lives after the racetrack,” said Mack. “We owe veterans a tremendous debt of thanks, and horses have been a passion of mine for more than 50 years. It was very easy to put veterans and horses together because they have many things in common. If we can validate equine-assisted therapy, it will be the first real EAT-PTSD treatment that’s proven by peer review.”

In 2015, Mack solicited Columbia to help design and complete the study. Since then, his foundation has provided $1.2 million to seed the initial phase and has committed additional funds to complete the research.

The study is being conducted at the Bergen County Equestrian Center in Leonia, New Jersey. The principal investigators are Dr. Prudence Fisher, associate professor of clinical psychiatric social work at Columbia and research scientist at the New York State Psychiatric Institute, and Dr. Yuval Neria, Columbia’s professor of medical psychology and director of trauma and PTSD at the New York State Psychiatric Institute. Both researchers were drawn to the project because they believe other treatments for PTSD are needed. At one point, horses were also a part of their personal lives.

The study is being conducted at the Bergen County Equestrian Center in Leonia, New Jersey. The principal investigators are Dr. Prudence Fisher, associate professor of clinical psychiatric social work at Columbia and research scientist at the New York State Psychiatric Institute, and Dr. Yuval Neria, Columbia’s professor of medical psychology and director of trauma and PTSD at the New York State Psychiatric Institute. Both researchers were drawn to the project because they believe other treatments for PTSD are needed. At one point, horses were also a part of their personal lives.

“Unlike dogs, who grant love unconditionally, relationships with horses must be earned and trust must be established before they welcome you into their world,” said Fisher. “Before this project, I don’t believe either of us had thought about horses in the therapeutic sense, but they are fascinating. Horses have eyes on the sides of their heads for a reason. They’re prey animals and naturally vigilant, and hypervigilance is common among veterans with PTSD. Horses constantly look for danger and are aware of their environment. The same is true for soldiers who have experienced combat. This presents an opportunity for veterans to recognize and understand fear responses as well as re-learn how to build trust and how to trust themselves again.”

“Horses constantly look for danger and are aware of their environment. The same is true for soldiers who have experienced combat.”

Unlike other evidence-based treatments, EAT-PTSD focuses on symptoms instead of trauma. By interacting with horses, veterans learn to better recognize their emotions and interact more effectively with others. They also learn to think critically, which helps them control their emotions.

“Horses are sensitive to verbal and nonverbal cues, which enables them to provide good feedback to veterans about how they’re communicating,” Fisher said. “Horses are herd animals and social creatures that look for relationships. They exist ‘in the moment’ and are forgiving—they don’t hold grudges. Plus, they’re big, which may initially scare some study participants, but their size makes them good mirrors for veterans, so they can learn from their reactions. Horses are patient and don’t judge, which helps veterans learn from their mistakes.”

Born in Israel, Neria was recruited after the September 11 attacks to bring his expertise and training in trauma-related mental-health problems to Columbia’s research community. Since then, he has led and collaborated on numerous epidemiological, clinical and neuro-imaging studies on PTSD.

“The idea that horses can be psychologically beneficial was not foreign to me, but I never conducted research on the topic,” he said. “These wonderful creatures came out of the wilderness willing to be trained and are great partners for humans. I’ve witnessed a great change in America. I feel humans are more aware of the moral depth that must be recognized in horses. People are paying homage to the animals that have served them well, both on and off the track.”

Neria fought in the Yom Kippur War and was awarded the Medal of Valor, Israel’s highest military decoration. He also fought in the 1982 Lebanon War.

“The Yom Kippur War was one of the worst attacks in the history of the conflict between Israel and the Arab nations,” Neria said. “I was a young lieutenant on one of the armed posts in the Suez Canal. My company and battalion were directly hit. I was able to survive a number of explosions and was appointed company commander. On the 12th day of the war, I was severely injured and evacuated to a hospital in the center of Israel. Most of my friends and fellow soldiers who I fought with died, were injured or captured.”

Recovering from his injuries, Neria was able to focus on a number of processes while trying to understand the emotional wounds of war. Fortunately, the war did not cost him his scientific intellect. He learned to understand trauma and PTSD.

“One thing I learned as a veteran and from my research work with PTSD, is that a soldier is a soldier, regardless of geography, culture and country,” he said. “The memories are still fresh and never leave you. When I look back, I feel so lucky to have survived physically and mentally. What enabled me to do so was accepting the trauma and not running away from it or trying to silence it. I was fortunate to publish a war novel based on my experience, but other veterans, especially here in America, are not so blessed.”

The first phase of the project is complete; the team produced a training video and will publish a study-protocol manual that can be replicated. The goal of the second phase is to test the therapy for effectiveness by treating at least 60 veterans and publish results in a leading medical journal. According to Neria, 17 groups have already completed therapy; only one group remains in treatment, making 18 groups total.

The team is using magnetic resonance imaging (MRI) to visualize the impact of EAT-PTSD on veterans. It is the only EAT program in the United States that uses neuro-imaging. MRI scans provide an objective measure to further validate and strengthen the clinical data. This approach moves well beyond patient feedback by measuring structural cerebral changes and biomarkers. The use of MRI will help with grant-funding efforts for larger-scale studies.

“I believe veterans are underserved and oftentimes misunderstood in the situations they find themselves in when they return home from war,” said Anne D. W. Poulson, a strategic advisor to the Man O’ War Project at Columbia University. “We still don’t have the best means of helping them assimilate back into society. Our therapy lets them create trust with the horse, learn behaviors and bring their progress home to family, friends and work.”

Like the study’s principal investigators, Poulson is no stranger to horses. She owns a horse farm in Orange, Virginia. Neria and his family will soon have a horse farm of their own in upstate New York. He credits the study with his family’s decision.

“Even for us, the scientific team, conducting the study and watching veterans with horses changed me and others,” Neria said. “It made me happy, so much so that I want horses back in my personal life again. There is a warmth, a positivity to horses that helps everyone.” 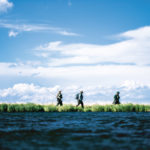 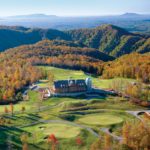 Next Story
A True American Spirit