The lyrics of Bob Marley and the Wailers resonate with American artist John Bukaty. One from the song “Trenchtown Rock” stands out: “One good thing about music, when it hits you, you feel no pain.”

Art helps us relate to one another, and no experience is more universal than pain. Bukaty knows pain. He has risen from the ashes of trauma, addiction, heartbreak and economic struggle.

The son of an NFL football player, Bukaty was a high school and college standout himself. Plagued with permanent injuries from his college years playing for the Kansas Jayhawks, Bukaty quit football and the university. He chose a life in business, just as his father had done after his NFL career was over. Then music changed everything.

“In 1999, I traveled to Colorado to see a Widespread Panic concert with some friends, and the experience was pure ecstasy,” Bukaty said. “My first love has always been art, and in that moment, inspired by music and the collective experience we shared as an audience, I realized I had to be an artist. I was making good money at the time in Chicago, but it’s not what I wanted to do with my life. So, I left the corporate world and moved back to my hometown of Kansas City to pursue my dream.”

Bukaty grew up drawing—first in mud—then on paper with pencil. Self-taught, he worked diligently on his art in grade school. His mother supported his passion and regularly took him to local art museums so he could study works up close.

After he returned to Missouri, Bukaty began painting again and started a weekly live painting show at a local brewpub. The Thursday night event grew, and it eventually led to other live painting commissions.

Encouraged by friends and fans—and looking for a bigger stage—Bukaty moved to Colorado and became a rock n’ roll painter. Denver’s location and fanatical music fans have made it a favorite destination among touring musicians of all genres, and Bukaty quickly became a popular fixture at local concerts.

Today, Bukaty is sober, lives in New Orleans and is widely regarded as one of the pioneers of live painting. He defines the pursuit as a form of improvisational performance art in which an artist completes a visual art piece in a public performance, accompanied by a DJ or live music, and channels that music into art.

“I am a live painter. I’ve been painting live for 20 years. I’ve painted all around the world—at music festivals, sporting events and fundraisers. My intention is to create the spirit of inspiration and improvisation and capture the soul of events around me. Sometimes I’ll start a painting and alter it on-the-fly to reflect the lighting, music and the crowd. Live painting is improvisation at its finest, and you don’t always know what the finished product will look like until the music stops.”

At events, Bukaty creates a unique vibe through chaotic composition and explosive color. He believes a live painting can create a lasting impression on guests for years to come, especially if they become involved in the whole experience.

“Private parties and events are special,” said Bukaty. “Sometimes people add a brushstroke of their own to the work. Collaborating with others is spiritual. Event hosts keep the original, and guests often get a numbered print of the original—and other gifts. A live painting can live in their minds forever—and participants get their very own copy they can cherish.”

Not all of Bukaty’s work centers on live painting. In 2009, he traveled to India and created 100 paintings in 100 days in his “100 Paintings Ago” collection. Six years later, he went to Ireland and captured the Irish landscape and culture in his collection “Ireland’s 33.”  In both journeys, his travels and works were recorded in short film documentaries.

“I am a vessel,” he said. “I try to meditate, write poetry, sleep, eat healthy and cope with old traumas. Growth is painful, and letting go of old things helps work part of the pain away. So does creation. I probably have more than 2,000 pieces of art to my name—including works by BlüJack, my true-to-myself alter ego I brought to life in 2005. The intent behind BlüJack was to help bring peace, love and service to the world. My journey is on a timeline. I start and stop, mix up visual styles and am always on the lookout for what’s next. But I love the chaos of people and live music. My brush hardly leaves the canvas in those settings. I enjoy opening myself up to the universe and finding that flow state.”

“Climb to Safety,” Bukaty’s latest project named after the song written by Jerry Joseph and Glenn Esparza and recorded by Widespread Panic on the album “’Til the Medicine Takes,” is an ambitious undertaking that came to him in a dream. The artist’s plan is to paint 120 ladders and install them throughout New Orleans, including along Bayou St. John, a quiet neighborhood close to the Fairgrounds that is the site of the annual New Orleans Jazz & Heritage Festival.

“I want people to use me as a conduit, and I view art as a way to connect us all. Sometimes it’s the only way I can explain ideas. ‘Climb to Safety’ is already underway and I welcome departures like this.”

Bukaty has collaborated with more than 20 artists, including New Orleans musician and hometown hero Anders Osborne. A number of his collaborators are musicians, and Bukaty says musicians are always interested in creating anything. Especially Osborne, who Bukaty used to represent in his gallery.

“We are in a renaissance,” Bukaty said. “It’s already happening with art and creativity. Young kids are creating and editing works and videos on Instagram, YouTube and TikTok. A lot of people criticize technology, but I believe it has led to a renaissance and the beginning of something special. I see a future in which people lead with their hearts. This separates us from the bots. We all have to serve someone, and we might as well serve art. Inspiration is invisible, and artists make the invisible visible. That’s why imagination is so powerful. I think young people are finding that flow state, and the future looks bright.”

Learn more and book a live painting event with Bukaty at www.johnbukaty.com.

Joe Shields is the editor in chief of The Virginia Sportsman. He is a writer and marketing executive based in Charlottesville, Virginia. His writing and photography have appeared in The Virginia Sportsman and other publications. He is also an award-winning, gallery-represented artist whose work is found in private collections and galleries. Whether fly fishing or surfing, drawing or painting, he celebrates sporting life and culture in his narratives and art. 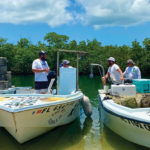 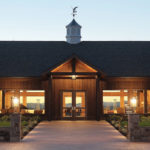