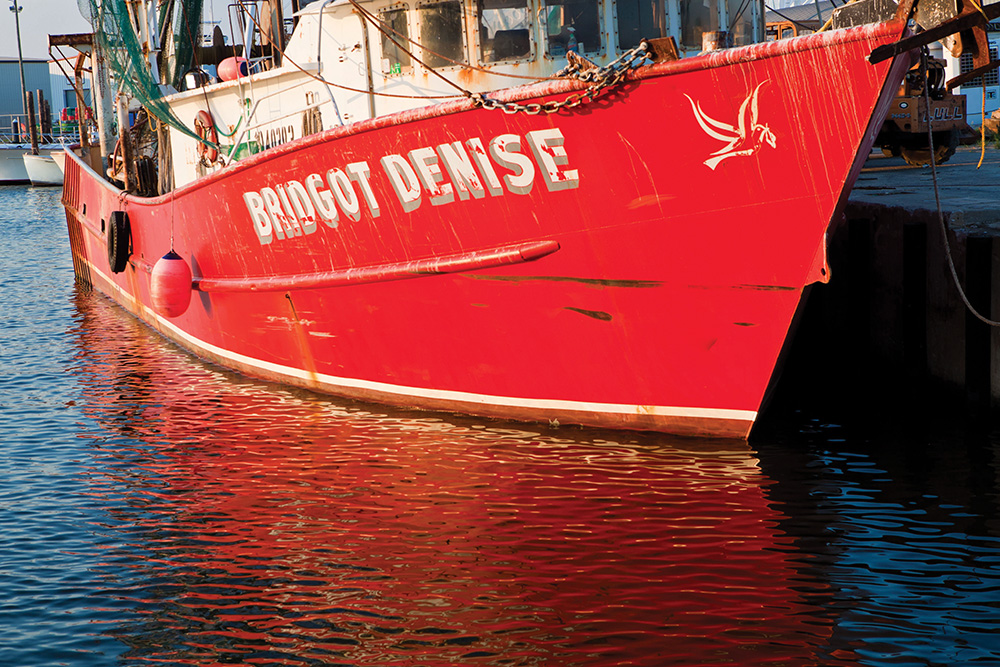 It’s an early June afternoon, and I’m quietly seeking solace at the bar of Tortugas Lie in Nags Head, N.C. Before me is a glass of Sauvignon Blanc, a cup of ice, a pair of Mahi Mahi tacos, a pool of black beans with a dollop of sour cream, a generous portion of yellow rice, a few sliced Jalapeno peppers and a slight scoop of red sauce.

I’m not exactly morose, but I am sorely disappointed.

It’s 3 p.m. at this surfer bar posing as a Caribbean outlier. Nailed to the walls and ceilings are hundreds of vanity plates, mostly from Carolina and Virginia. They read like memes: SRFN LIFE, RDNECK, SMK IT UP, HOSER, NAUDI 1, BADGRL, NGS HED, MRJUCE—and one from the rarified air that permeates Mecca’s West End, TUCAHO.

I’ve recently returned after five lackluster hours—from 7 a.m. to noon—on Pamlico Sound with Chris McDonald, owner and intrepid guide from First Light Charters out of Wanchese. That’s a tiny fishing village 10 minutes south of Manteo on NC Route 345. It’s the last scrap of authenticity (aside from this spot, plus Sam & Omie’s and Awful Arthur’s) on the now-overcooked Outer Banks.

Wanchese is a true working community of commercial fishermen, shrimpers, dredgers, tugboat captains and all manner of native Outer Bankers—not the “come-heres” from parts North. That hungry species has been striving mightily to modernize the rustic essence of these barrier islands for five decades now. Sadly, they’ve succeeded.

But don’t take my word for it. Here’s how the Richmond Times- Dispatch’s Charles McDowell described the trend in a column back on Sept. 3, 1961:

“The Outer Banks of North Carolina, only recently the remote retreat of tourists who preferred lonely sand and wind and waving sea oats to the company of other tourists, is rapidly becoming one of the great tourist thoroughfares of the East Coast.

“Cape Hatteras, which used to be the very symbol of windswept loneliness in this part of the country, had nearly 150,000 visitors in one month this summer.”

By 2021, Cape Hatteras National Seashore had hosted a record of three million tourists. But not little Wanchese. No, this community perched on the southern tip of Roanoke Island is home to fewer than 2,000 working residents. There are bait shops, boat builders, diesel tanks, seafood processing plants and a water tower labeled “Wanchese Harbor.” It’s the tallest structure around, one that dwarfs the tiny shingle-style homes sprinkled about.

This 32-year-old is an Outer Banks native, educated at first at Kitty Hawk Elementary, then Kill Devil Hills Middle and High Schools. He earned his captain’s license at the nearby Coastal Studies Institute, taking an eight-day course and passing the test on his first try.

He started fishing these waters early. “Growing up around here, you go surfing when the waves are good, and you fish when they’re not,” he says. “I kind of fell in love with fishing and ran away with it.”

He began with kayaks and a jon boat—a 20-foot KenCraft—from the Eastern Shore. Next up: a Carolina skiff. Now he pilots a 24-foot, flatbottom KenCraft Bay Rider powered by a Yamaha 150. It’s the perfect vehicle for the quick spurts and scoots needed in the shallow water on the sound side. From it, McDonald’s caught his share of citation trout and drum.

He and I started the day early at The Landing Grill, with black coffee and a sesame bagel smeared with cream cheese. Fifteen minutes later, we were slipping through channels and across currents, around tiny islands covered in muted-brown-and-bright-green seagrass. Hawks, cranes, ospreys, pelicans and bald eagles hovered above us. Winds blew in first from the northwest, shifted to the west at 10 a.m., and by 11 a.m. they were cooling us from the northeast.

We were cruising at 25 mph across light chop, then glassy water. In the distance we could see Mann’s Harbor Bridge, two miles east. Behind us was the new, doglegged Basnight Bridge leading to Hatteras, off to the west. At one point, the cottages of South Nags Head lingered, mirage-like, due east toward the ocean.

I’d joined McDonald on a quest for three- to five-pound speckled trout during their prime spring season—mid-May to mid-June. We were equipped with light spinning tackle and plastic lures. “Fish ‘em like you would largemouth bass,” McDonald says. “Use a jig action.”

We worked our way, island by island, through 10 of them in four hours. Sometimes we’d drop anchor near a channel and fish in five feet of water; other times McDonald would nudge the boat’s bow right up to an island’s sand-and-grass-lined edge, sinking a seven-foot fiberglass pole called a “poke anchor,” and tying it by rope to a cleat.

These days, the longish islands of Pamlico Sound are breaking up into smaller chunks, in part because of sea-level rise, and in part because of a raging population of helix, a rat-like creature that lives part-time on land and part-time in water. Full-time, it burrows tunnels beneath the islands, hastening their demise. “Those things are nasty,” McDonald quips.

In four hours, we see a few strikes from the elusive trout, some hard, others barely discernible. One 12-inch flounder takes a lure and flops into the boat, too small to keep. But the trout are nowhere to be found. “They must be sleeping,” McDonald says.

So, we head south to a channel near the Bodie Island Lighthouse, in search of drum. Now we’re using mullet fillets on round hooks, casting out on heavier spinning tackle, with sinkers. Three lines at a time go out, twice in succession. There are tugs on the lines, but none of the big thumps common to the species. It’s more a matter of nibbles around the edges; nothing serious.

Four days later, we discuss the situation by phone. McDonald had been out that morning, fishing the same islands, and coming back with trout, bluefish and sea mullet. “They were pretty big trout—in the 15-to 19-inch range,” he says. “The bigger one was a three-pounder.”

So why, I asked, are there different results on different days? “If you knew that, you’d be rich and famous,” he says. “It has a lot to do with tide, wind direction and phases of the moon.”

McDonald makes educated guesses about what each is doing, but that’s not always reliable. Sometimes the stars are aligned and it’s a banner day; others, like mine, are total blanks. “Fish have tails, they don’t have homes, and they can go wherever they please,” he says. “It just doesn’t always pan out.”

On that morning of June 3, we had great weather and a few favorable moments, but in general the water of the Pamlico Sound was lifeless. “I wouldn’t have done anything different based on the knowledge I had,” McDonald says. “It was just one of those days—they were somewhere, but not on the ends of our lines.”

Back at Tortugas Lie, I’m mulling over the day’s results, munching on my fish taco, when I look back to the rear of the dining room. There on the wall, I squint to see a blue, white and yellow Pennsylvania vanity plate. On it is the cruelest meme of all: “SKUNKD.”

I order another glass of wine. When I look again, that Pennsylvania plate—like the trout I’d been fishing for all morning—is nowhere to be seen.

To book a tour with First Light Charters, visit
www.firstlightobx.com.

J. Michael Welton writes about architecture, art and the outdoors for national and international publications. He is the author of “Drawing from Practice: Architects and the Meaning of Freehand” (Routledge: 2015) and editor and publisher of the digital design magazine www.architectsandartisans.com.

(Visited 87 times, 1 visits today)
PrevPreviousRaise a Gourd
NextThe Pandemic and its Impact on Outdoor Recreation Next