I imagine most catch-and-release anglers are guilty of posting and sharing “grip-and-grin” pics. I am.

These days cell phones enable us to take amazing photographs—and who can keep track of the megapixel capabilities? Factor in easy-to-use internet platforms, and today almost anyone can become a social-media maven by clicking a few buttons on a mobile device.

Fly fishing and photography are a good fit—the subject matter and locales are exceptional, but there’s a price to pay. Our waters are overcrowded, and there’s more pressure on fish—and on anglers who post pictures of their catches online.

I encountered these habits on a recent float trip on the Upper Delaware River. It was late in the season, and there were no other anglers on the water. Thanks to local fly-fishing guide and photographer John Miller, I was able to catch a few wild browns on dry fly.

Instinctively I wanted to capture a few photos of myself with trout to post on this magazine’s social channels. The guide was very polite and accommodating.

“Hold your breath while you hold the fish,” Miller told me. “If you can’t breathe, neither can the fish. These trout are all wild, and they’re our treasures. Let’s take a few photos with the fish in the net and in the water. No offense, but photos of fish are prettier without humans.”

Miller’s guidance echoed the principles of a budding movement. It’s one that protects fish and helps people distinguish their photos in creative ways from typical Instagram posts.

The reality of catch-and-release angling is that not all fish survive. Experts estimate that approximately 10 percent of fish die after being caught and released. The percentage largely depends on how anglers handle fish.

“What we don’t have yet are precise mortality estimates for each fishery,” said Sascha Clark Danylchuk, executive director of Keep Fish Wet. “We do, however, know from the science that the fate of released fish is primarily determined by angler behavior. Studies point to a variety of actions taken by anglers that can either increase or decrease the chance of mortality for fish after release. The genesis of our organization is the realization that a Version 2.0 is needed for catch and release.”

Clark Danylchuk is a fisheries scientist who has worked for a number of conservation and educational nonprofits. Her primary focus is on recreational angling and the science of catch and release.

Several years ago, the intersection between her work as a scientist and her passion for angling led her to Keepemwet Fishing’s #KeepEmWet movement. She recently rebranded the endeavor and turned it into the nonprofit (501c3) Keep Fish Wet, which has become popular with anglers who want to document their catches and improve the outcomes for the fish they release.

“Forming a nonprofit elevated the movement and has opened the door for a better appreciation of our best practices and for what Keep Fish Wet really is,” Clark Danylchuk added. “We’re more than just a hashtag and want to extend our reach beyond social media. We now have greater capacity to bring our education and outreach programs to anglers. It’s made a big difference.”

Catch and release has been used as a conservation tool for more than a century. Today, scientific studies focused on how fish respond to capture, handling and release can be used to help reduce the negative impacts of catch and release—and serve as a basis for best practices. While many of these studies contain insights that can help anglers improve the outcomes for the fish they handle and release, the information is locked behind expensive paywalls and written in a technical language that is difficult to understand.

“One of our goals is to unlock science and make it more accessible and understandable to all anglers,” explained Clark Danylchuk. “This helps to bridge the gap between fisheries science and angling communities and makes our campaigns more effective. Our end goal is to support sustainable, resilient fisheries by sharing best practices that are based on science.”

Keep Fish Wet believes there’s nothing wrong with lawfully harvesting fish for dinner. They do not finger-point or shame. In some instances of “catch-and-keep” angling, people return fish to the water because of size limits and other factors. In reality, catch-and-keep anglers do practice catch and release. All anglers can make a difference by taking simple steps—and these practices don’t require any pricey gear.

There are a few tenants and plenty of tips on the group’s website. For starters, it’s important to minimize air exposure. Fish need oxygen just like us, but they get it from water because they can’t breathe air. In addition, eliminate contact with dry or hard surfaces to help keep a fish’s slime layer intact. Reducing handling time or any form of restraining fish is also critical. Fish are wild animals, and holding them in captivity (whether in your hands or in a net) even for brief periods is stressful. Letting fish return to their natural environment as quickly as possible is one of the best things you can do to ensure they are healthy and live to be caught again another day.

Learn more by visiting www.keepfishwet.org. Following these tips adds a human touch that makes sense in catch and release.

Cover photo: Actions taken by anglers can increase or decrease the chance of mortality for fish after release. Photo by Dave McCoy 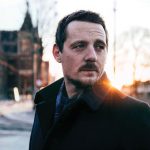 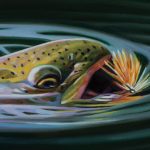