The Road to Red Lion

“The road is always better than its inn.”

I didn’t initially plan on visiting a place called Red Lion,but I was drawn there anyway. Haven’t you ever studied a state highway map of an area and allowed your eyes to roam freely, looking for communities previously unknown to you? If you haven’t you should try it sometime. It’s certainly a learning experience.

Some location names catch you by surprise: Cuckoo, Blue Anchor and Accident. Others have a lilting, melodious sound: Brandywine, Cumberland, Greenbrier, Shenandoah and Albemarle. You’ll also discover some places are branded with flat, no-nonsense names such as Mechanicsville, Central Garage, Oilville, Cashtown and Fairplay. There’s even a Chilesburg of all things. Most of these destinations have one thing in common—they’re off the beaten path.

Playing with maps is exactly how I discovered Red Lion, Pennsylvania, which is situated east of Interstate 83, just above the Maryland-Pennsylvania line. While planning a trip to the Amish Country, I was searching for a quick, direct route; I also wanted to leave open the possibility of an unscheduled, circuitous journey that would make the passage more interesting. My camera was at the ready, and I was excited to record any points of interest that came my way.

Several hours before dawn, I left home with high expectations so I could take advantage of the early morning light and have a go with my camera. However, I began to waiver in my initial thinking hours into my drive. It was pitch dark. The monotonous constancy of the interstate was unnerving; the true scale of the impending and ongoing distance became more apparent with each mile. I wasn’t quite sure if I would travel all the way to Red Lion. It was beginning to seem very unlikely.

But suddenly, I spotted mist with my peripheral vision. I watched as it slowly rose over the rolling countryside and defined the tree lines behind a farmhouse. The beauty of this unusual autumn dawn caught me by surprise. Then I noticed the pale light of a bare lightbulb on the dwelling’s porch, and it changed the course of the day.

I stopped the car, put it in reverse and returned to what was to become my first photographic study. Through the viewfinder I saw a picture: the dawning of a new day. The solitary light shined like a beacon; from the darkness it signaled proof of life.

My high expectations returned. I exited the interstate to find the road to Red Lion.

I took a number of pictures during the next several hours. These included a farmer posing with his young colt and a bright red barn framed by a leafy dell. The twisting country road itself also provided composition.

I exhausted the morning and some film before I even arrived in Red Lion. On the outskirts of town, I photographed a historic marker. The object satisfied my curiosity; Red Lion was founded in 1736 and was named after an old inn that once stood nearby.

There was no doubt in my mind that Red Lion had an interesting history. Had I known then about H. L. Mencken’s delightful yarn, “The Girl From Red Lion, P.A.,” I might have stayed longer to see what had become of her. Perhaps it’s better not knowing.

The fact there’s little else to recall about Red Lion is not important. It only reinforces the adage, “The road is always better than its inn.”

From experience, I believe Don Quixote was on to something.

Chiles Larson was a frequent contributor to The Virginia Sportsman. He is the author of “Virginia’s Past Today,” a series of photo essays all linked to the theme of continuance, and “Barboursville Vineyards: Crafting Great Wine Inspired by Spirits from the Past.” Larson passed away on Jan. 22, 2021, just before his 92nd birthday. His stories and photographs live on. 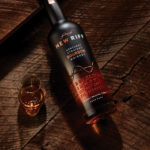 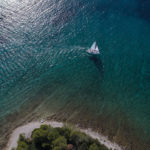